Spoilers ahead if you haven’t seen episode eight of The Mandalorian!

We’ve all been quite worried since he was taken at the end of last week’s episode of The Mandalorian, but he was fairly quickly saved by the IG-11 droid towards the beginning of this week’s finale. And he was actually rescued from Jason Sudeikis and Adam Pally, who played the two rude, Baby Yoda-punching stormtroopers who were tasked with transporting him. But of course that was not the end of the story, as a whole bunch of people still want Baby Yoda for their own—and not to snuggle with.

Mando (whose real name is Din Djarin) even almost died, because he’s ridiculous and refused to take off his helmet because no living thing has seen his face since he became a Mandalorian, until the IG-11 reminded him that he’s not a living thing. So Pedro Pascal took off the helmet, and he looked terrible. Because he was dying, and you tend to look terrible while you’re dying. But he also just looked like a beat up Pedro Pascal.

Once Mando wasn’t dying anymore, he consulted the Armorer, who told him that he had to track down Baby Yoda’s home planet and species to keep him alive, and also he’s now Baby Yoda’s dad (at least until they find his real family), and they’re an official little clan. Plus he gets a jetpack, so it was, all in all, a very successful and adorable visit to Mandalorian HQ.

The Armorer then also singlehandedly fended off the army of stormtroopers that came in after Mando, and it was enough to declare ourselves huge fans of the Armorer. Then the IG droid had to sacrifice himself heroically in order to save Mando, Cara, Karga, and Baby Yoda, and we’re over here starting a fan club for him too.

Finally, Mando and Baby Yoda were free to set off to figure out where that baby came from, but we didn’t get to see that journey, and we’ll have to wait until season two to get there. 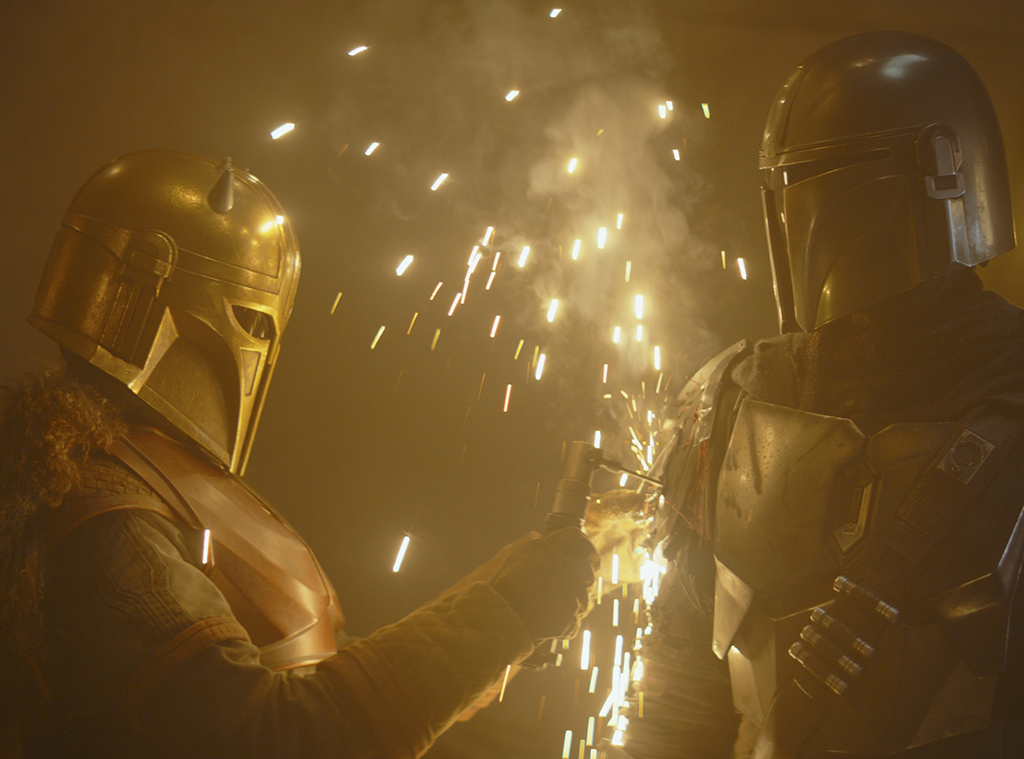 What we got instead at the very end of the episode was Gideon, thought to be dead after Mando attacked and brought down his ship, emerging from his ship with his own fancy lightsaber, known as the Darksaber.

Per IGN’s helpful breakdown, the Darksaber was created 1000 years ago by the only Mandalorian who was also a Jedi, and had been held in a Jedi museum until it was stolen back by the Mandalorians. To wield it, you have to have killed the previous owner in combat, and if you wield it, many Mandalorians will see you as the ruler of Mandalore.

The transfer of the saber to various different people has played out on Clone Wars. It once belonged to Darth Maul, and was last seen in the hands of Bo-Katan Kryze, who then ruled over the planet. Now, somehow, Gideon (who was apparently supposed to have been executed for war crimes) has got it, which is probably bad news for everybody.

Baby Yoda Breaks the Internet
But it also means we might have to pay close attention to The Clone Wars when it returns for season seven on Disney+ next year, because we could actually get some explanation for what happened on Mandalore and just how worried we should be about Gideon.

The Mandalorian season one is now streaming on Disney+, and season two will be arriving in Fall 2020.

‘The Voice Kids’ Contestant Rejects a Gift From Mohammad Hamaki