This year, millions of people around the world mobilised in protest to highlight the dire emergency facing our planet. Could 2019 prove to be the year when talk turned to action on the climate crisis?

We looked back at some of the biggest stories of the year in science and the environment.

The year the world woke up?

In 2019, the reaction to the ongoing climate crisis switched up another gear. Inspired by Swedish activist Greta Thunberg, the climate strike movement exploded this year. Millions took part in mass protests during the course of the year in countries as diverse as Australia, Uganda, Colombia, Japan, Germany and the UK.

Greta chose to make a statement when she sailed – rather than flew – to a UN climate meeting in New York. Summing up the trajectory for many who have joined popular climate movements, she told chief environment correspondent Justin Rowlatt: “I felt like I was the only one who cared about the climate and ecological crisis… it makes me feel good that I’m not alone in this fight.”

The UK’s Extinction Rebellion (XR) was making its point through non-violent direct action in 2019. The group, which aims to compel government action on climate change, occupied five prominent sites across central London in April 2019. Notably, they parked a pink boat in the middle of busy Oxford Circus bearing the phrase “Tell the Truth”.

This year also saw the UK’s Parliament – along with individual councils around the country – declare a climate emergency, granting what had been one of XR’s key demands.

But there were also setbacks to political efforts aimed at reducing greenhouse gas emissions. The US – one of the world’s top emitters – began the process of pulling out of the Paris Agreement. This deal was conceived in 2015 with the intention of keeping the global average temperature to below 2C. President Donald Trump said the pact was bad for the US economy and jobs.

This year’s UN climate meeting – COP25 – ended in a deal many described as disappointing. The result means that the onus now falls on the UK to resolve many of the most challenging questions at COP26 in Glasgow in 2020.

In April, astronomers released the much anticipated first image of a black hole. This is a region of space from which nothing, not even light, can escape. The picture was taken by a network of eight telescopes across the world and shows what was described as “the heavyweight champion of black holes”.

The 40 billion km-wide, spacetime-warping monster features an intense halo, or “ring of fire”, around the black hole caused by superheated gas falling in.

The image caused a sensation and raised the profile of one computer scientist working on the project. 29-year-old Dr Katie Bouman helped develop an algorithm that allowed the image to be created. A picture of her with hands clasped over her mouth, barely containing her excitement at the astronomical picture on her laptop, quickly went viral.

But her fame led to trolling, with some accusing her of hogging credit for a male colleague’s work. That team member, Dr Andrew Chael, quickly came to her defence. In an interview for the BBC 100 Women series, Dr Bouman said: “At first I was really taken aback by it. But… I do think it is important that we highlight the women in these roles.”

Land and oceans under threat

Two major reports from the UN’s climate science body revealed in sharp relief the extent to which humanity is ravaging Earth’s land surface and her oceans. The first of these documents from the IPCC (Intergovernmental Panel on Climate Change) warned that we must stop abusing the land if catastrophic climate change is to be avoided.

The report outlined how our actions were degrading soils, expanding deserts, flattening forests and driving other species to the brink of extinction. Scientists involved in the UN process also explained that switching to a plant-based diet could help combat climate change.

The second report, dealing with the world’s oceans and frozen regions, detailed how waters are rising, ice is melting and species are being forced to move. As co-ordinating lead author Dr Jean-Pierre Gattuso said, “The blue planet is in serious danger right now, suffering many insults from many different directions and it’s our fault.” The authors believe that the changes we’ve set in motion are coming back to haunt us. Sea level rise will have profound consequences for low-lying coastal areas where almost 700 million people live.

On 1 January, Nasa’s New Horizons spacecraft made the most distant ever exploration of a Solar System object. Launched all the way back in 2006, it performed its primary task – a flyby study of the Pluto system – in 2015. But with plenty of gas still in the tank, mission scientists directed the spacecraft towards a new target, an object called 2014 MU 69.

MU 69, later dubbed Ultima Thule, and more recently Arrokoth, may be fairly typical of the primitive, icy objects occupying a distant zone of our Solar System known as the Kuiper Belt.

There are hundreds of thousands of objects out there like it, and their frigid state holds clues to how all planetary bodies came into being some 4.6 billion years ago.

Earlier this year, scientists presented details of what they had found at a major conference in Houston. They had determined that Arrokoth’s two lobes formed when distinct objects collided at just 2-3m/s, about the speed you would run into a wall, according to team member Kirby Runyon.

In September, former UK chief scientist Sir David King said he was scared by the faster-than-expected pace of climate-related changes. One of the most shocking examples this year of the extreme events Sir David spoke of was surely the record ice melt in Greenland.

In June, temperatures soared well above normal levels in the Danish territory, causing about half its ice sheet surface to experience some melting. As David Shukman reported on his trip to the region, during 2019 alone, it lost enough ice to raise the average global sea level by more than a millimetre.

Underlining the rapid nature of the change, he returned to a glacier he had filmed in 2004 to find that it had thinned by as much as 100m over the period.

Greenland’s ice sheet stores so much frozen water that if the whole of it melted, it would raise sea levels worldwide by up to 7m. Although that would take hundreds or thousands of years, polar scientists told the American Geophysical Union meeting in December that Greenland was losing its ice seven times faster than in the 1990s.

Prof Andy Shepherd, of Leeds University, said: “The simple formula is that around the planet, six million people are brought into a flooding situation for every centimetre of sea-level rise.”

While civilisation-threatening asteroids are a staple of the movies, the probability of a sizeable space rock hitting our planet is very low. But as the dinosaurs found out, the risk does increase with time. Some 19,000 near-Earth asteroids (NEAs) are being monitored, but many lurk undetected by telescopes, so there is always potential for a bolt-from-the-blue.

In March, Nasa scientists told the Lunar and Planetary Science Conference (LPSC) that a big fireball had exploded in Earth’s atmosphere at the end of 2018. The space rock barrelled in without warning and detonated with 10 times the energy released by the Hiroshima atomic bomb.

A video showing the smoke trail from the #Meteor over the Bering Strait last December, produced using data from @JMA_kishou‘s #Himawari satellite.
The orange meteor trail in the middle, shadow above-left. 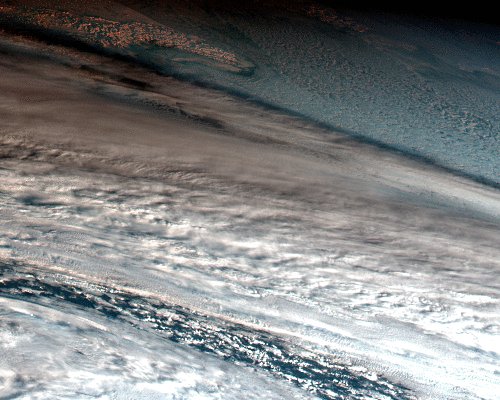 739 people are talking about this

Luckily, the rock blew up over the sea off Russia’s remote Kamchatka Peninsula. But an outburst that size could have had serious consequences had it occurred nearer the ground, over a densely populated area.

Then in July, an asteroid the size of a football field buzzed Earth, coming within 65,000km of our planet’s surface – about a fifth the distance to the Moon. The 100m-wide rock was detected just days before it passed Earth.

Meanwhile, two robotic spacecraft have been examining different NEAs close-up. Scientists working on Japan’s Hayabusa mission reported that their asteroid, Ryugu, was made of rubble blasted off a bigger object. And the US Osiris-Rex spacecraft detected plumes of particles erupting from the surface of its target, Bennu.

The gas sulphur hexafluoride (SF6) isn’t a household name. But as the most powerful greenhouse gas known to science, it could play an increasingly important role in discussions about climate change.

As environment correspondent Matt McGrath reported in September, levels are on the rise as an unintended consequence of the boom in green energy. The cheap, non-flammable gas is used to prevent short circuits and fires in electrical switches and circuit breakers known collectively as “switchgear”.

As more wind turbines are built around the world, more of these electrical safety devices are being installed. The vast majority use SF6.

Although overall atmospheric concentrations are small for now, the global installed base of SF6 is expected to grow by 75% by 2030. Worryingly, there’s no natural mechanism that destroys or absorbs the gas once it’s been released.

Quantum computers hold huge promise. The “classical” machines we use today compute in much the same way as we do by hand. Quantum computers promise faster speeds and the ability to solve problems that are beyond even the most powerful conventional types. But scientists have struggled to build devices with enough units of information (quantum bits) to make them competitive with classical computers.

A quantum machine had not surpassed a conventional one until this year. In October, Google announced that its advanced quantum processor, Sycamore, had achieved “quantum supremacy” for the first time. Researchers said it had performed a specific task in 200 seconds that would take the world’s best supercomputer 10,000 years to complete.

IBM, which has been working on quantum computers of its own, questioned some of Google’s figures. But the achievement represents an important step towards fulfilling some of the predictions made for.