Telenor, the Norwegian telecommunications company, says it has reached an agreement to sell its Myanmar mobile phone business to M1 Group, exiting a country that was plunged into chaos after the military seized power in a coup on February 1.

The operator will sell all its operations to M1, an investment holding firm headed by Lebanon’s richest man and a former prime minister, for $105m.

“The situation in Myanmar has over the past months become increasingly challenging for Telenor for people security, regulatory and compliance reasons,” Sigve Brekke, president and CEO of Telenor Group, said in a statement. “We have evaluated all options and believe a sale of the company is the best possible solution in this situation.”

The military led by Senior General Min Aung Hlaing arrested Aung San Suu Kyi and senior members of her elected government on February 1, and took power for themselves, claiming fraud in November elections that Aung San Suu Kyi’s party won in a landslide.

The coup brought an abrupt halt to 10 years of slow democratisation, and triggered widespread protests as well as a mass civil disobedience movement to which the military has responded with lethal force. Nearly 900 people have been killed since the coup while 5,120 are currently detained, according to the Assistance Association for Political Prisoners which has been monitoring the situation.

Telenor said it had invested in Myanmar in 2014 because it thought “access to affordable mobile services would support the country’s development and growth”.  Since the coup the generals have cracked down on the free flow of information, throttling internet access and banning Facebook and other social media platforms as well as satellite dishes.Efforts to achieve a political solution to the crisis appear to have ground to a halt with the Association of Southeast Asian Nations (ASEAN), the 10-member regional grouping, which also includes Myanmar, making little headway on the Five-Point Consensus it agreed with Min Aung Hlaing in April.

On Wednesday, Michelle Bachelet, the United Nations’ top official on human rights, urged ASEAN to do more to get the proposed dialogue between the military and Myanmar’s democratically-elected government off the ground, and to allow access for humanitarian aid.

“It is urgent for ASEAN to appoint a special envoy or team to get some kind of political dialogue under way,” Bachelet said. “I encourage ASEAN to engage with the democratic leadership and civil society, not just the military front.”

The United States and some other countries have imposed sanctions on senior generals and some military businesses, but action at the UN has made little progress.

US, Russia agree on more talks after Moscow offers reciprocal lifting of restrictions 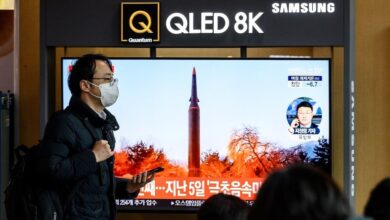