A cylindrical complex in one of the busiest intersections in central Tehran, at the crossroads of the city’s two main thoroughfares, never wears a dull look.

It is the hub of Iran’s theater industry.

Known as the City Theater, the place is thronged by artists and art aficionados regularly — some looking for work, others craving entertainment as a distraction from the rigors of daily life.

On a regular day, there is a palpable buzz inside the complex, created by theater festivals and locally produced shows. Outside, amateur performers present skits to enthrall onlookers.

Milad Shahabi, a 21-year-old theater artist and university undergraduate, is looking to carve a niche in the field that he loves the most.

Speaking to Anadolu Agency in a crowded park outside City Theater, he said the industry continues to thrive but needs an “infusion of fresh blood.”

Sporting an oversized t-shirt and baggy jeans, the young artist said he is still waiting for “a big break” after almost two years of performing on the streets and in small exhibitions.

“There is no dearth of artistic talent in the country, but fewer opportunities exist for young theater artists like me today,” he said, pointing to financial difficulties and lack of proper management.

Many Iranian theater artists — both newcomers and veterans — who spoke to Anadolu Agency echoed similar concerns but affirmed that the show must go on.

Zahara Saghar Roshanaei, an established theater actor, told Anadolu Agency what drives senior artists like herself is their “love and passion for theater,” rather than financial considerations.

“The most important challenge for a theater artist here is that it is not financially viable anymore,” she said, with a hint of regret. “But it’s the love for art that keeps an artist going.”

The theater scene in the Iranian capital was long described as extraordinarily vibrant, with local theatrical productions garnering worldwide fame and critical acclaim.

But in recent years, in the wake of financial problems as well as the coronavirus pandemic, the industry has been severely hit. Theaters have remained closed and artists have been out of work.

Mohammad Reza Azadfard, a veteran theater artist and trainer, said the theater scene in Tehran has become “much more vulnerable” in the past two years due to the pandemic as “shows have been disrupted,” and art centers have “lacked a standard policy.”

“During this time, many theaters were empty and closed. If a performance went on stage, it was without spectators,” he told Anadolu Agency in an interview.

Before the pandemic broke out in Iran in February 2020, Azadfard said the theater industry was “peaking in terms of quantity” with about 143 performances every night in Tehran in different genres.

“The flow was suddenly interrupted and the theater experienced a staggering fall,” he said, adding that the challenge has been largely overcome in recent months, but the “quality” is still missing.

Azadfard, who has groomed many young theater artists in Tehran and authored a book as well, blames the gradual downfall of the theater industry in Tehran on “wrong policies” of theater managers and a “decline in the quality of performances.”

“The situation is very appalling, in terms of economics, quality, quantity, productions, choice and taste of managers, audits, and censorship,” he said.

What keeps Azadfar, Roshanaei and other artists going is their love for the theater, which they proudly wear on their sleeves.

However, some like Maryam Mir Hosseiny, a theater artist, teacher, and researcher, admit that they have lost their motivation and drive to continue pursuing their only love and passion.

“My motivation as a theater artist before inflation and economic problems was only love for acting — being on stage even with a low salary,” she told Anadolu Agency. “But there is no motivation now.”

Hosseiny, who has been part of many critically acclaimed shows, said being an artist is “still not considered a job” in her society.

Despite legitimate misgivings and concerns shared by artists, the theater scene in Tehran is still alive, thanks to the motivation driving those running the show — the love for the art.

City Theater, which opened in 1972 with Anton Chekov’s play, The Cherry Orchard, continues to be the nerve center of Iran’s theater industry and one-stop-destination for artists and art lovers.

The Iran Shahr Theater, one of the oldest theaters in Iran situated in Artists Park in central Tehran is another buzzing place for art lovers, with round-the-week performances. Vahdat Hall, dating to the pre-1979 Pahlavi period, is the only opera house in the capital.

In recent months, since lockdown restrictions were eased, the hustle and bustle have slowly returned to city theaters with performances featuring adaptations of western plays and local productions.

Last month, Iran hosted the 40th edition of the Fajr International Theater Festival, which has become an important annual fixture for those associated with the theater industry.

Artists from Afghanistan, Armenia, Azerbaijan, Iraq, Italy, France, Algeria and several other countries performed during the festival, which ended Feb. 15 with a glittering awards ceremony.

The top award went to “A Requiem for Julius Caesar and Several Birds of Simorgh,” directed by Mojtaba Rostamifar, which blends William Shakespeare’s The Tragedy of Julius Caesar and legendary Persian poet Attar’s masterpiece The Conference of the Birds.

Some notable shows in recent months have included a poignant story of late Argentinian football star Diego Maradona, who was brought back to life during a play at Neauphle-le-Chateau Theater by Mehran Ranjbar, whose earlier plays featured Steve Jobs and Marlon Brando.

Lilith, a story set in former Yugoslavia, highlighting ethnic conflicts in the Balkans, and Kiwi dramatist Eric Bradwell’s play ‘There Is No Return’ dealing with the aftermath of wars, were also big attractions.

“There are challenges, serious and major challenges, facing the theater industry and artists, but as they say, the show must go on,” theater critic Amir-Hossein Rahmani told Anadolu Agency. 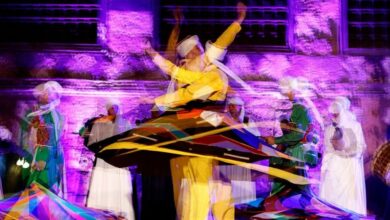 ‘Is Another World Possible?’: Istanbul Music Festival to Return with Outdoor Concerts