Egyptian star Tamer Hosni and his wife, Moroccan artist Basma Bousel, are not having a healthy happy relationship that is far away from cheating rumors, as some reports claimed that the artist had a relationship with a new girl.

An Instagram account by Khaled Sawaf claims that the Egyptian singer got married to a woman named Yara Alsukari, where he posted a picture of an empty customary marriage contract without any information referring to the personalities between whom the contract was made.

One of the accounts shared the news via Instagram story and wrote a text that referred to Bousel: “Basma you have to respond to the rumors and put an end to it, they took it too far! one person started a rumor and now everyone is believing it.” 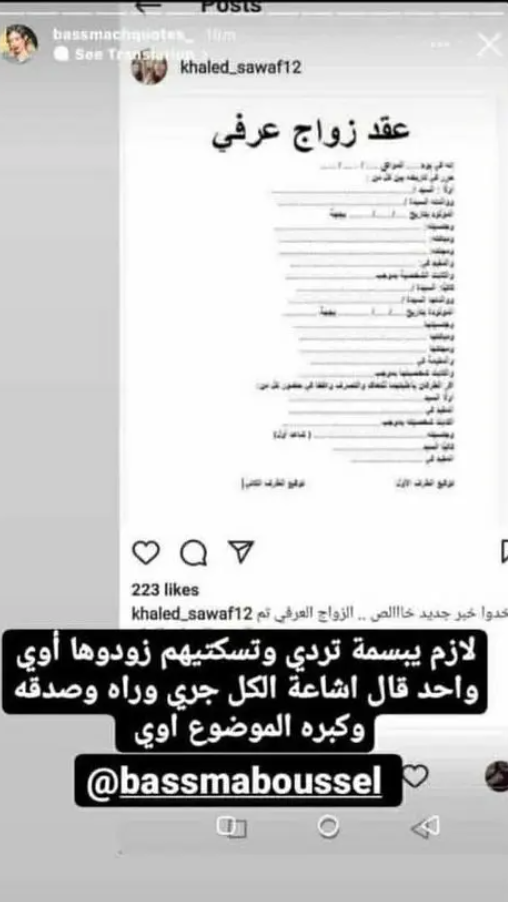 Basma took to Instagram to publish a series of posts in which she sends an angry message to the person who is trying to affect her marriage, however, Basma did not mention any names.

”Don’t re-friend someone who tried to destroy your personality, money, or relationships… the snake sheds its skin to become a bigger snake.” she wrote.

The 30-year-old also shared “O Lord, save me from the hypocritical and treachery people in my life, and compensate me for my patience.”

The rumors started after Al Sukkari was seen with Tamer at a wedding, where she donned a white strapple gown, and let her blonde hair down on her shoulders.

This is not the first time Hosni got involved with Al Sukkari, as his relationship with Basma was on the verge of divorce, as Basma previously asked for separation following cheating rumors of his affair with Yara.

Bousel had confirmed that she was in the process of preparing for divorce papers, with a post she shared via her Instagram Story, in which it stated: “For all the people who send me pictures and videos of Tamer and I see that he does not show respect, whether, in pictures nor videos, I hope you stop sending me anything because I don’t care, and I also want you to know that we are separated and preparing the divorce papers.”

”Please respect the feelings of each one of us and stop sending pictures, good luck to everyone.”

Gwen Stefani Shares Her Most Important Request For Her Wedding

Did Harry Styles Give up His British Accent?