“Horrifying” reports have emerged that the Taliban have severely restricted the rights of Afghan women and girls in areas they have seized, United Nations Secretary-General Antonio Guterres said Friday.

The Taliban have been inching closer to Kabul and full control of Afghanistan, fueling fears of a return to their brutal regime that was toppled by the United States-led 2001 invasion.

“I’m… deeply disturbed by early indications that that the Taliban are imposing severe restrictions on human rights in the areas under their control, particularly targeting women and journalists,” Guterres told reporters.

“It is particularly horrifying and heartbreaking to see reports of the hard won rights of Afghan girls and women being ripped away,” he added.

The UN chief warned that “directing attacks against civilians is a serious violation of international humanitarian law and amounts to a war crime.”

Security forces in Afghanistan have capitulated on fronts, with individual soldiers, units and even whole divisions surrendering – handing the insurgents even more vehicles and military hardware to fuel their lightning advance. 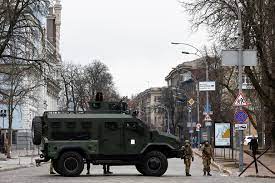