Videos have surfaced showing Syrian regime forces destroying graves in the town of Khan al-Sabil, in Syria’s Idlib province, where the regime is fighting to gain control over the final opposition-held province.

Twitter user “Mr. Revinsky” shared a video of several men dressed in Syrian regime military attire demolishing a tombstone with a rock. Some of the men are seen kicking the tombstone as well. Another man can be seen digging up the grave with a shovel.

“After 9 years, this is the best #Assad can offer to Syrians,” Mr. Revinky said in the tweet.

#Syria #Idlib
Footage showing #SAA soldiers inside a cemetery in Khan al-Sabil deconsecrating the graves of people killed in Idlib.
After 9 years, this is the best #Assad can offer to Syrians. 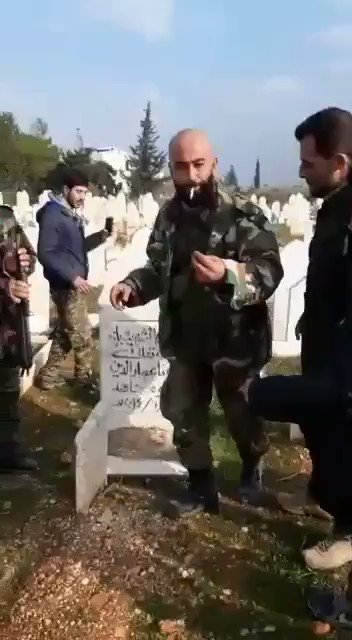 Another video shared by user Beritan showed almost all graves in a yard destroyed. A man in the video can be heard saying, “Be careful, there are many open graves … be careful not to slip.”

The Syrian regime announced on Sunday it had recaptured more than 600 square kilometers of territory so far in its campaign in Idlib province.

The Idlib region is home to around three million people, half of whom were evacuated by regime forces from other parts of the country after forces beseigned cities controlled by the opposition and bombarded them with airstrikes.

The Syrian army has taken control of dozens of towns and villages in recent days as part of the campaign, a statement from the armed forces said.

The Syrian regime has been bombarding the area around the strategic city of Saraqib, Idlib, which is the intersection of two major highways between the capital Damascus and second city Aleppo.

The clashes have also strained relations between Russia, which backs the regime, and Turkey, which supports opposition groups in the area.