Abdul-Halim Khaddam, a former Syrian vice president who became a prominent opponent of President Bashar al-Assad after fleeing to Paris in 2005, died on Tuesday at the age of 88 in France.

Khaddam succumbed at 5 a.m. (0300 GMT) to a heart attack, Salah Ayach, a Syrian exile who was close to him, told Reuters.

Khaddam had served for 30 years in the upper echelons of the state under the late President Hafez al-Assad and his son, Bashar, who became president in 2000.

From Paris, Khaddam tried to carve out a role in the opposition to Assad but struggled to win the trust of others due to his decades of work in the ruling Baath Party.

After an uprising against Bashar al-Assad began in 2011, Khaddam said Syrians would have to take up arms in self-defense unless the world intervened to protect them.

He accused Assad, a member of the minority Alawite sect, a branch of Shia Islam, and his family of instigating sectarian strife.

Khaddam, a Sunni Muslim from a middle-class family in the Mediterranean resort town of Baniyas, was once seen as a possible successor to Hafez al-Assad. But instead, he helped Bashar firm his grip on power after he took office in June 2000.

In the days following the elder Assad’s death, Khaddam pushed through decrees elevating Bashar’s military rank to general and making him commander of the armed forces – key moves in the uncertain process of succession.

A lawyer by training, Khaddam was foreign minister for 14 years before becoming vice-president in 1984. He also took part in shaping Syrian policy in Lebanon, where Damascus was the main power until being forced to withdraw its forces in 2005 after the assassination of Lebanese ex-prime minister Rafik al-Hariri.

After leaving Syria for France in 2005, Khaddam hit out at the Damascus government’s corruption and failure to reform. He also said Hariri was threatened by Assad months before his death – an assassination for which a UN-backed tribunal would later indict four members of the Lebanese group Hezbollah.

The Shia group, a close ally of Assad, denies any role.

Short, sharp, and outspoken, Khaddam started his political career as governor in turn of Quneitra, Hama, and Damascus, after the Arab Baath Socialist Party came to power in 1963.

This was a rapid rise for a man who joined the party at the age of 17 and in a matter of years was elected secretary of the Damascus branch and then member of the ruling Regional Command. 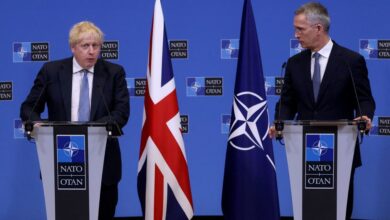 Europe turns to Africa for gas as alternative to Russia