In an Instagram post, Zakaria shared the certification given by the Guinness World Record committee for her latest artwork of mandalas and wrote: “The moment I have been waiting for years.” 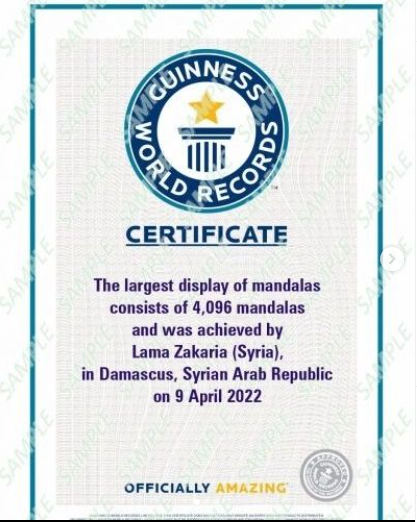 The Syrian artist’s largest display of mandalas consists of 4,096 mandalas in various sizes and colors. The world record prize was given to the Syrian artist who created the magnificant painting on April 9, 2022.

Lama Zakaria, 23, is well-recognized for her amazing drawings of mandalas as she has over 2K followers on Instagram.

According to media sources, the mandalas artist  completed her masterpiece in her small studio in the Syrian town of Deir Atiyah, where she used “acrylic colors to paint single, non-repetitive and different circles from each other.”

The Syrian artist also added that she made “4,096 mandala circles of various diameters, colors and decorations, the largest of which is two meters in diameter and the smallest with a diameter of 2 cm, on 8 MDF boards to combine them together with an area of approximately 25 square meters.”

What is the Mandala:

Mandala as an art form first appeared in Buddhist art that was produced in India during the first century B.C.E. In New Age, the mandala is a diagram, chart or geometric pattern that represents the cosmos metaphysically or symbolically; a time-microcosm of the universe. 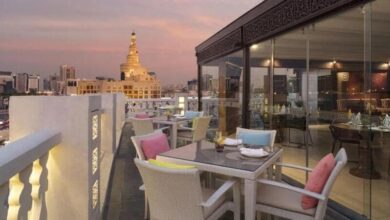 Cocktail and Mocktail Spots in the Middle East