Syria could face severe bread shortages for the first time since the start of the war, another challenge for President Bashar al-Assad as he grapples with an economic meltdown and fresh United States sanctions, a United Nations official, activists and farmers said.

Any major disruptions to Syria’s bread subsidy system could undermine the government and threaten a population highly dependent on wheat as rampant inflation drives up food prices.

“There is already some evidence of people cutting out meals,” said Mike Robson, the UN Food and Agriculture Organization’s (FAO) Syria representative.

” … If the currency continues under pressure, imports will be difficult to obtain and the months leading up to the 2021 wheat harvest may see real shortages.”

Syria’s economy is collapsing under the weight of its complex, multi-sided conflict, now in its tenth year, and a financial crisis in neighbouring Lebanon, choking off a vital source of dollars.

Soaring prices have made life harder for Syrians ravaged by a war that has killed hundreds of thousands and displaced millions.

In the past six months alone, the number of “food insecure” people in Syria is estimated to have risen from 7.9 million to 9.3 million, according to World Food Programme data.

“My 50,000 pound [monthly] salary [$21 on the informal market] is barely enough for a few days and I am living on debt. People are selling their furniture … In our lives this has never happened,” said state employee Yara.

The US in June imposed its most sweeping sanctions on Syria yet. Washington says the Caesar Act excludes humanitarian aid and aims to hold al-Assad and his government accountable for war crimes.

The Syrian pound, which held steady at about 500 to the dollar for several years, went into free fall last year, hitting a low of 3,000 in June, in anticipation of fresh sanctions.

That currency drop is hindering al-Assad’s plans to buy up all of this year’s wheat to make up for a shortfall in imports that has been drawing down on strategic reserves.

Before the war, Syria could boast more than a year of wheat reserves.

The government declined to answer questions on the current size of reserves and wheat procurement. FAO’s Robson said he did not have data.

Abdullah, a confectionary trader from Damascus, has never seen poverty on this scale.

“We had always been self-sufficient. Why we have reached this point where even a loaf will soon become a dream, I really don’t know,” he told Reuters news agency in a text.

Al-Assad has regained control of much of the country from rebels, with backing from Russia and Iran. But the main wheat regions remain in the hands of Kurdish-led fighters who seized vast territory from the ISIL (ISIS) group.

Syria has had drastically lower output since the conflict erupted. It used to produce four million tonnes in a good year and was able to export 1.5 million tonnes.

Demand across the country is about four million tonnes, leaving a shortfall to fill from abroad.

But international import tenders conducted by the state’s main grain buyer, Hoboob, have repeatedly failed since last year. The government declined to comment on how many deals it managed to conclude.

While food is not restricted by Western sanctions, banking restrictions and asset freezes have made it difficult for most trading houses to do business with Syria. 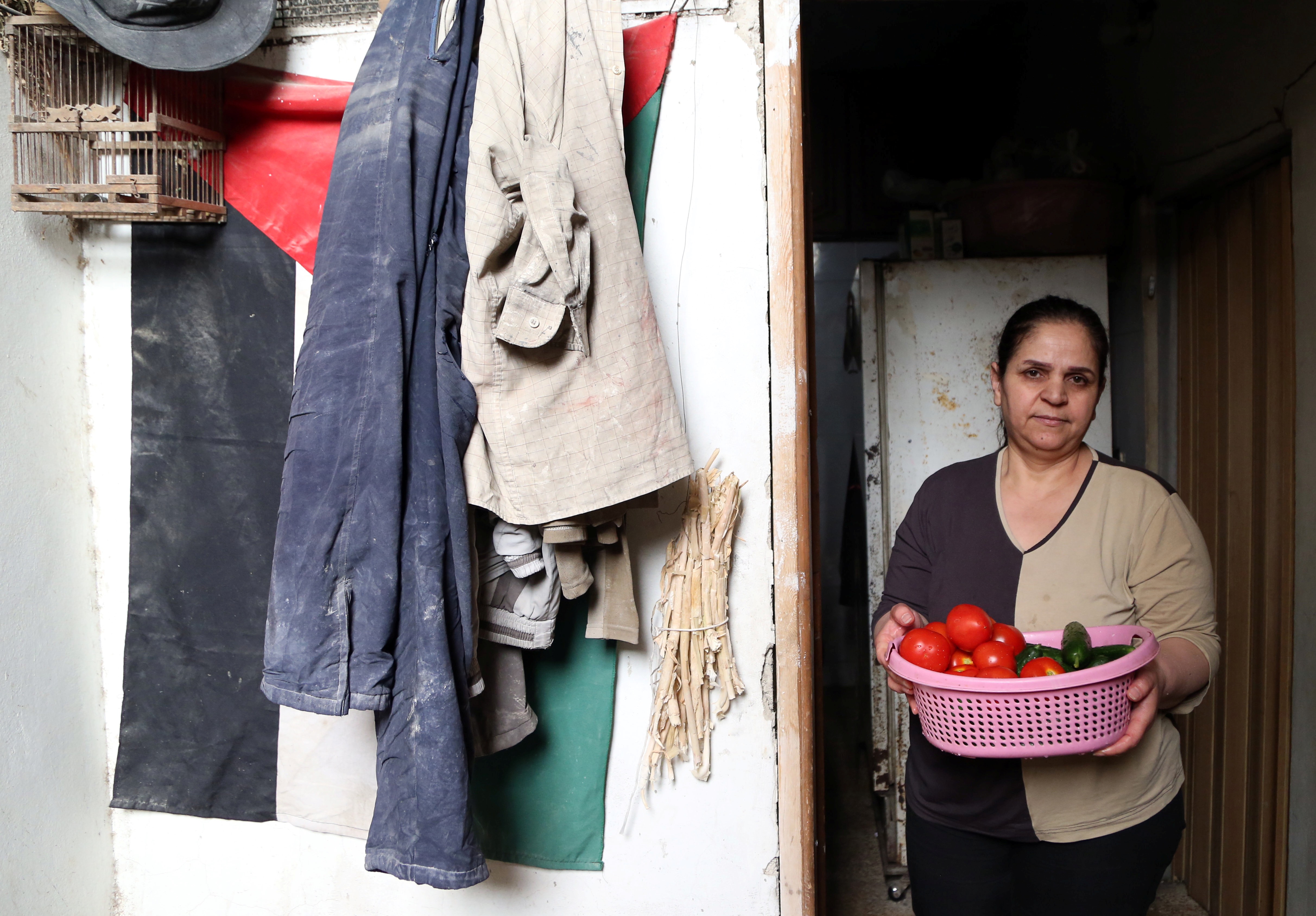 A Damascus woman holds a plate of vegetables brought from a market [File: Yamam Al Shaar/Reuters]

With major grain traders out of the equation, the government relied on businessmen to conclude transactions to sustain the bread subsidies.

“They import quantities to Lebanon and then take it to Syria by land unless it is Russia giving direct shipments, government to government, then they can deliver to (the port of) Latakia,” said Ayman Abdel Nour, a US-based political analyst.

“Now that window has closed with the problems in Lebanon.”

Reuters data shows that since June 2019, Hoboob has issued at least 10 international tenders for between 100,000-200,000 tonnes of wheat, failing to report results for most.

Youssef Kassem, the head of Hoboob, has been quoted by media as stating that 1.2 million tonnes of Russian wheat imports were contracted throughout 2019 amounting to $310m. Reuters could not independently verify that information.

Hoboob tried to barter some of Syria’s durum wheat, used to make pasta, for soft bread-making wheat twice in September 2019, with no result announced.

When bread lines started to get longer in government-held areas around March, Russia was urged to send the full amount of the 100,000 tonnes of wheat it had promised as humanitarian aid since 2019.

“Maybe for the first time since the start of the Syrian uprising, you basically had a shortage of subsidised bread in ovens and that led to the development of a thriving black market,” Elizabeth Tsurkov, Fellow at the US-based Foreign Policy Research Institute think-tank and a Syria expert, said.

Russia, the world’s largest wheat exporter, has been a steady supplier of wheat to Syria but the size of its wheat aid has not met demand.

Russian customs data does not show supplies to Syria, and the size of real supplies varies wildly.

“The supplies are going on. There are however, problems with the payment and availability of vessels ready to deliver to this destination,” a Russian industry source told Reuters. 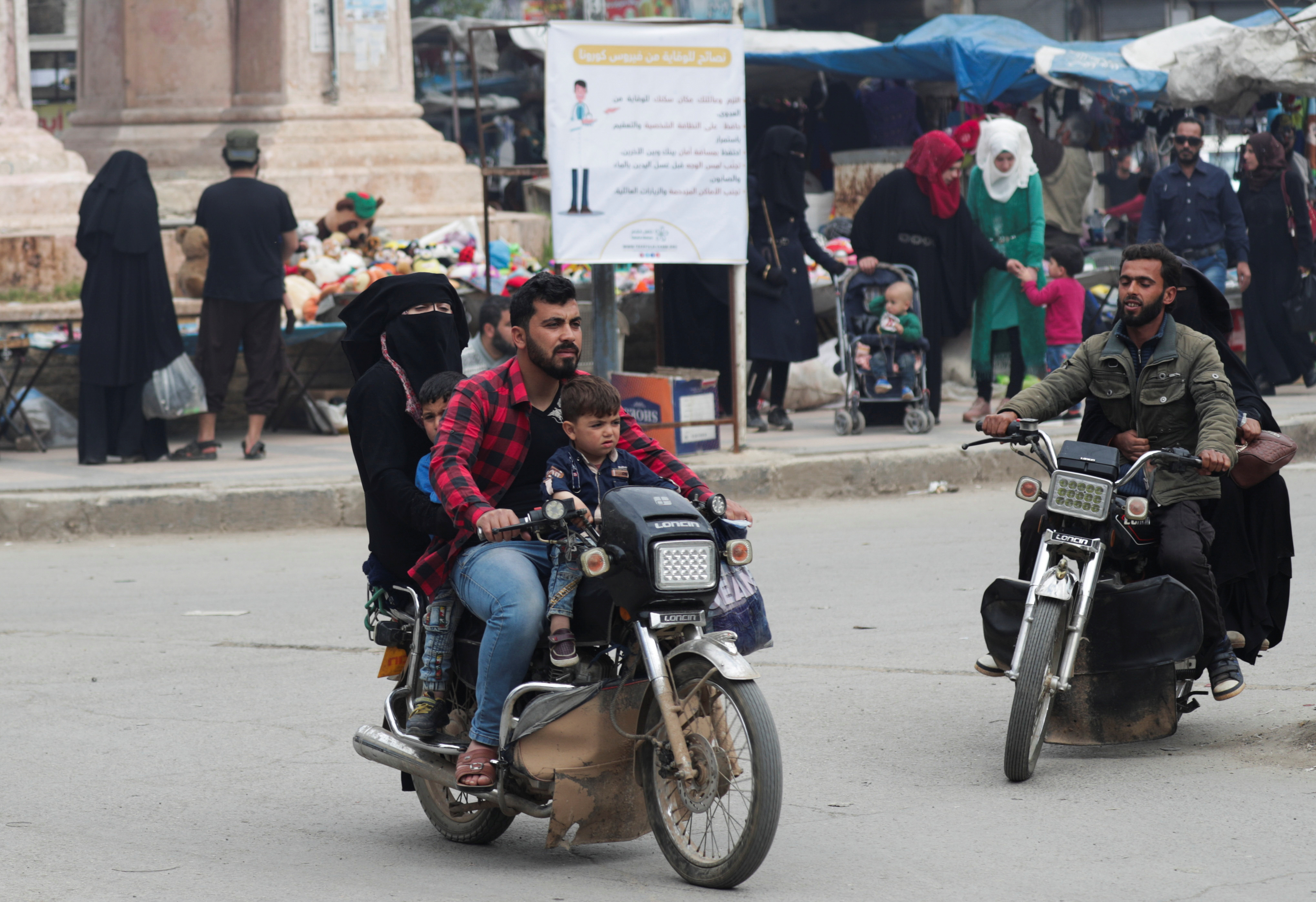 People on motorbikes near a coronavirus awareness billboard in the rebel-held city of Idlib in Syria [File: Khalil Ashawi/Reuters]

The source estimated only about 150,000 tonnes of commercial wheat had reached Syria between July 2019 and May 2020.

A race for reserves

The government blamed bread lines on technicalities and with the start of its wheat buying season in June announced it would buy every single grain of its local crop.

By mid-June, Hoboob said it had so far procured about 212,000 tonnes. FAO estimates approximately 700,000 tonnes of the total crop lie in government-controlled territory this year.

But the three provinces which account for more than 70 percent of production lie mostly in the hands of the Syrian Democratic Forces (SDF), led by the Kurdish Syrian forces, the People’s Protection Units (YPG).

The government has historically lured farmers to sell their crop by paying a higher price than its rivals, even as the wheat remained in areas outside its control.

But facing a currency crash and in fear of a ripple effect from Caesar sanctions on the economy of the areas they control, the Kurdish-led authority not only raised its local wheat purchasing price but also pegged it to the going rate of the dollar, pledging to pay $0.17 a kg no matter how far the pound slips.

Salman Barodo, head of the region’s economy and agriculture board, said so far 400,000 tonnes had been bought and warned against any attempts to smuggle the crop outwards.

The Kurdish-led authority, that runs the SDF region, is aiming to stockpile 18 months’ worth of supply and only open sales to government territories in the case of a surplus.