An increasing number of pet owners are choosing to give away their pets or abandon them on the side of the road due to an inability to afford the costs of caring for them. As Lebanon’s economic crisis continues to worsen, further strain is being placed on NGOs that take in these animals.

Operating in northern Lebanon Refq, takes in stray and abused animals to put them up for adoption. The NGO has felt the full weight of the crisis, and is now dealing with rocketing inflation.

Founded in 2017, Refq’s founder, Nuhad Sheikh, said that its aim was to establish a shelter where animals could heal – both physically and mentally – with adoption the ultimate goal.

“We do mostly work with just dogs because dogs are highly targeted in this part of the world,” Sheikh told Al-Arabiya English. “It is now getting more difficult for both [cats and dogs]. It’s difficult for human beings let alone dogs and cats.”

While Refq takes in dogs that are abandoned, many of the animals at the shelter have been severely abused and require medical treatment. Many take months to recover mentally, and socialize.

These dogs stay at the shelter for extended periods of time. One has lived there since the shelter was established, making it harder for the staff to cope as the number of animals being cared for grows.

Dogs arriving at Refq are spayed or neutered, but with increased costs for these operations, they can’t do this for all of the animals.

“We have almost half or a bit more [that are spayed and neutered]. We have a few puppies that were even born at the shelter,” Sheikh said. “Whenever we get a single donation, we either take it to rescue another case that needs medical help, it’s medical help that is on top of our list, and then comes the spay and neuter. If there’s an animal in terrible need of basically surviving, this is where the money goes.”

In addition to NGOs, veterinarians have also been hit with rising costs.

Dr Haitham Safar, the owner of Canicat Veterinary Hospital in Beirut, explained that because of the current situation in Lebanon, pet owners can no longer afford to pay for normal checkups, and are instead focusing on emergency treatments.

“Most of the customers are bringing their pets in the case of emergencies,” Safar told Al-Arabiya English. “From our records we noticed that we do less vaccinations, deworming and operations such as neutering.”

Vets themselves are also struggling to keep their practices open because equipment and supply costs are increasing.

“We don’t have access for many basic and important medication, spare parts for our equipment, we are struggling with the shortage of electricity due to the fuel crisis, many of our colleagues from the clinic staff left the country,” Safar explained. “The rental fees and general expenses for the clinic has increased and our income has deteriorated. We work continuously in huge amount of stress due to the above-mentioned reasons.”

Because of the rising costs, Safar added that he has seen many people forced to give up their pets since they can no longer afford them.

Safar has relationships with several NGOs in Lebanon, and in these situations tries to help find these animals new homes. Often they are left on the side of the road to fend for themselves.

A cry for help

Sheikh sympathizes with those forced to abandon their pets, saying that she “understands the vet bills,” and notes that “there is also the food factor.” Pet food prices are rocketing too.

Pet owners finding themselves in the predicament of no longer being able to afford an animal is very difficult, but Sheikh revealed that she doesn’t understand how people can dump their animals on the side of the road or even abuse them.

“We had a case the other day of someone who has a dog, of course it is only tied in front of the house, but then they cut its ears off,” she recalled. “When we heard about it, it had probably just freshly happened. The dog was in extreme pain and extreme mistrust that he wouldn’t let anyone near him. We had to fight to take the dog away from that person. We were just saying that we had enough rescues for the year, like we weren’t going to take any more rescues, but he was a five-month-old puppy.”

Expensive care for the needy

Life inside these shelters has steadily gotten harder for the animals because the NGOs can no longer give them the same level of care.

“The big thing is, unfortunately, it is the quality [of care] that the dogs are receiving or that anything is receiving,” Sheikh stated solemnly. “Now they are getting second-grade food as opposed to when we first started when buying a bag of 20kg of dry food of very good quality was still not an issue. $20 was nothing as opposed to what it is now. It’s quite unfortunate. We’re still lucky if we get any donations at all mainly with foreign currency.”

Donations have largely dried up and receiving any money from abroad, while desperately needed, has become a challenge, making it almost impossible to keep up with the number of animals entering their care.

“Donations are less and the problem is that dogs that are being dumped are much more,” Sheikh said. “I think that people have a lot on their plate right now that are more important than just caring for animals. It is on top of our list but it is, unfortunately, not on top of everyone else’s’ lists. It’s probably not on the list for some people.”

There is no end in sight for Lebanon’s debilitating crisis, making those who work with animals worried about what the future might hold.

Should things continue to get worse, Sheikh explained that, as much as it would pain her, she will need to start turning away animals because Refq is running at capacity.

Will we be able to flatten the climate curve?

Meteor burns its way through sky over wide part of Japan

UK Doctors: A $6 Steroid Reduces The Risk of Dying From The Virus by One-Third

Edinburgh aims to become sanctuary for swifts as numbers decline 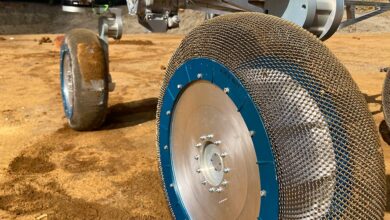 Covid: WHO says it is very worried about Europe surge