Most Asian and European stocks and oil prices fell on Wednesday, as the coronavirus pandemic continues to cause disruptions to economies the world over.

On Tuesday, the United States’s two key stock gauges posted their worst first-quarter performance ever, and their worst month since 2008, as much of the world went into lockdown to curb the spread of the pandemic.
“We can’t say the market has bottomed out. Investors are just staying on the sidelines for now, digesting what has happened so far,” Benny Lee, chief market strategist at EquitiesTracker Holdings, told Al Jazeera.

“The market will just be affected by volatility and what [US President Donald] Trump said, and what happened in Europe will affect our markets too,” Lee said.

Trump described his country’s efforts to slow the spread of the virus as a “matter of life and death” and warned Americans to brace for a “rough two-week period”.

The grounding of thousands of flights and closure of international borders and non-essential industries is causing trillions of dollars worth of damage to the global economy.
Calm before another storm?

Japan’s benchmark Nikkei 225 led losses in Asia on Wednesday with a 4.5 percent fall.

European shares also tumbled in early trade on Wednesday. Stocks in London, Germany and Paris were all down about 3 percent in early trade.

Some sense of calm did return to the markets on Wednesday, but the worst may yet be ahead as businesses stay shut, analysts said.

A key indicator of how nervous investors is the Chicago Board Options Exchange volatility index, also known as the VIX, or the fear gauge. The higher it trades, the more volatility in the US benchmark S&P 500 share index investors expect.

“Stock markets have calmed down noticeably, with the VIX having declined by 35 percent since its March 16 peak, though [it is] still more than three times the 5-year average,” Han Tan, market analyst at currency trading firm FXTM, told Al Jazeera.

“Investors must, however, remain vigilant against another spike in volatility, should equity markets be triggered into another selloff on signs that the COVID-19 crisis is worsening.”

US stocks fell by more than 20 percent in the first three months of 2020, according to Refinitiv data, despite a rebound in the last two weeks of March, while most other major share indices in Asia and Europe also remain below their February highs by similar amounts.

Data released by the Bank of Japan’s latest Tankan business confidence survey on Wednesday showed sentiment among the country’s large manufacturers plunged in the first three months of this year, tumbling to a reading of -8 from zero in December.

“While the [first quarter] Tankan survey held up slightly better than we were expecting, it still showed a marked deterioration in business conditions,” Tom Learmouth, who covers the Japan economy at Capital Economics, wrote in a note.

“With sentiment set to deteriorate further as lockdowns across the globe continue, the survey won’t provide too much comfort for the Bank of Japan,” Learmouth said.

In China, a private survey of factory activity that polls small and medium-sized firms, showed a modest improvement in March from a plunge the previous month, when most businesses were shut due to the government’s coronavirus containment measures.

But the recovery in the Caixin manufacturing Purchasing Managers Index (PMI) will likely be slow, analysts said.

“With a global recession now being the overarching theme for the year, investors are expected to endure a bumpy ride before they can place firm hopes on the eventual recovery.”

The US Congress and White House are readying a fourth stimulus spending package to counter the economic fallout from the containment measures as a large part of the world’s biggest economy stays in lockdown.

Trump this week called for a $2 trillion infrastructure bill to spur the economy and boost jobs.
Oil’s journey south

Oil prices slumped again even after Trump said he was ready to join discussions “if need be” between top producers Saudi Arabia and Russia about the plunge in energy prices.

Key oil benchmarks have slumped nearly 70 percent ever since talks between the Saudi-led Organization of Petroleum Exporting Countries and Russia broke down in early March, a trend that was exacerbated by a plunge in demand as much of the world shut down due to the pandemic. 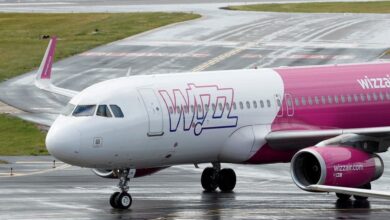