After cancelling a goal for Morocco in the first half, the team was able to score twice in the second half: the first by kicker Abdelhamid Sabiri, and the second by mid-fielder Zakaria Aboukhlal

The win sent a wave of jubilation across the Arab world, where audiences aspire a spot on the global football map. The fervor also spread to artists, like movie stars and singers, who took to social media to express their joy over the surprising victory.

Syrian singer Assala wrote on her Twitter page: ”I’m determined to get involved in sports; and it’s not a problem, if I were wrong, I’ll erase the mistake; it’s not the first time you’ve forgiven my mistakes.”

She added: ”Once again, Morocco will win 1-0 against Belgium; and there you go.”

Egyptian comedian Mohammad Henedy wrote: ”Congratulations to the lions of Morocco, a magnificent offensive performance and a great level, congratulations to Morocco and all Arabs, you made us proud.”

Lebanese singer Haifa Wahbe also voiced jubilation over the win. She tweeted: ”Really heroes, a performance that deserves the championship” 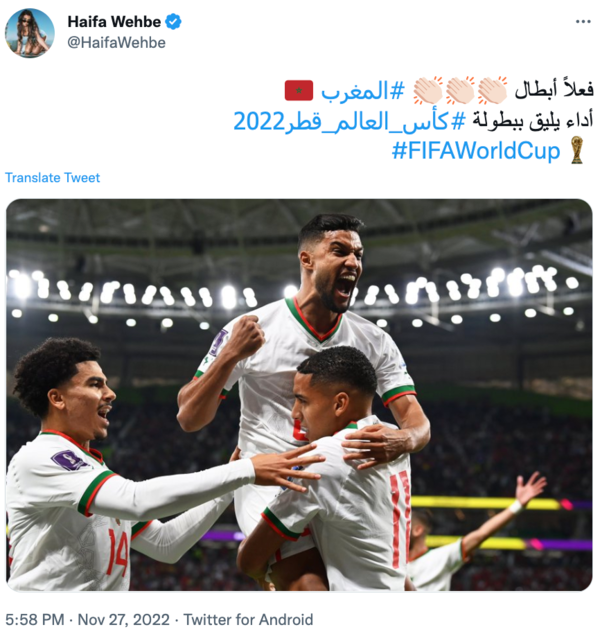 Moroccon singer Saad Lamjarred shared on his Instagram page a picture of him wearing a Morocco soccer jersey, which he captioned: ”A speechless joy, congrats Morocco.”

Lebanese superstar Ragheb Alama tweeted: ”All the encouragement for the Arab team #Moroccan_national team in its match with Belgium 🙏”

Anna Konkle Expects Her First Child with Her Boyfriend