CBS All Access announced the additions of Blu del Barrio and Ian Alexander to the cast of Star Trek: Discovery for the show’s third season on Wednesday. They mark the first non-binary and transgender characters in the history of Star Trek.

Del Barrio will play Adira, described in a statement as “highly intelligent with a confidence and self-assurance well beyond their years.”

Alexander will play Gray, an aspiring Trill host who “will have to adapt when his life takes an unexpected turn.”

Discovery already broke barriers for the Star Trek franchise by including the franchise’s first openly gay characters in Culber and Stamets. The series began in 1967, with spinoffs The Next Generation, Deep Space 9, Voyager, Enterprise, an animated series and 13 movies. All Access continues the Star Trek franchise with Picard, Lower Decks and the upcoming Strange New Worlds and Section 31.

Del Barrio auditioned for the role of Adira during their final year at the London Academy of Music and Dramatic Art. Alexander previously appeared on The OA and the video game The Last of Us Part II.

Star Trek: Discovery returns Oct. 15 on CBS All Access. At the end of season 2, the Discovery leapt hundreds of years into the future, where the third season picks up. 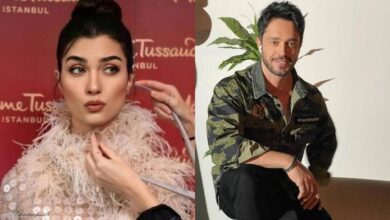 Carole Samaha Heavily Criticized for Her TikTok Debut.. Even Celebs Urge Her to Quit It!