Sri Lanka’s newly appointed prime minister has said that the cash-strapped island nation has run out of petrol stock, as he said the country desperately needed to secure $75m in foreign exchange in the next few days to pay for essential imports, including medicine.

“We have run out of petrol … At the moment, we only have petrol stocks for a single day,” Ranil Wickremesinghe said on Monday in an address to the nation, as the country suffers from fuel and medicine shortages.

He said the government was also unable to raise dollars to pay for three shipments of oil, with the ships awaiting outside the Colombo harbour for payments before discharging their cargoes.

“The coming months are going to be the hardest this country has ever gone through,” Al Jazeera’s Minelle Fernandez said, reporting from the capital Colombo. “Obviously this affects all factors of life, not just the industrial sector and the manufacturing sector, but also day-to-day life, children going to school –  every aspect you can think of, you name it.”

“So far the people did not have a clear picture of how bad things were. We kept getting reassured by successive politicians and that didn’t help as people had almost a false sense of optimism that things would be ok,” she added.

Wickremesinghe assumed office on Thursday after his predecessor Mahinda Rajapaksa was forced out after weeks of protests over the government’s handling of the economic crisis turned deadly.

President Gotabaya Rajapaksa replaced Mahinda, his elder brother, with Wickremesinghe, an opposition parliamentarian who has held the post five times previously, in a desperate bid to placate protesters.

The crisis led to widespread protests against President Rajapaksa and his family, culminating in the resignation of Mahinda as prime minister last week following deadly violence.

But protesters have rejected the appointment of Wickremesinghe as prime minister and continue to demand the resignation of Gotabaya Rajapaksa. The protesters and experts have accused the Rajapaksas of economic mismanagement leading to the crisis.

Despite acknowledging the harsh time ahead, the new leader urged people to “patiently bear the next couple of months” and vowed he could overcome the crisis.

He said the government had also run out of cash to pay 1.4 million civil servants their salaries in May, and he will turn to money printing as a last resort.

“Against my own wishes, I am compelled to permit printing money in order to pay state-sector employees and to pay for essential goods and services,” he said.

He also warned that fuel and electricity tariffs will be raised substantially and his government will also sell off its revenue-losing national carrier to reduce losses.

US military accuses Russia of deploying fighter jets to Libya 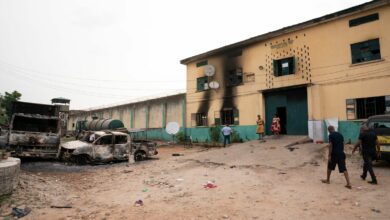