The number of daily coronavirus deaths rose in Spain for the second day on Wednesday as 757 people died over the past 24 hours, although the pace of the proportional daily increase in the death toll slowed down slightly, the health ministry said.

The total number of deaths caused by the new coronavirus in Spain rose to 14,555, the ministry said. The daily increase as a percentage of the total death toll was 5.5 percent, down from 5.7 percent the day before, when 743 people died.
Meanwhile, Wuhan began allowing people to leave on Wednesday for the first time since the central Chinese city was sealed off 76 days ago to contain the coronavirus that first emerged there late last year.

Meanwhile, Wuhan began allowing people to leave on Wednesday for the first time since the central Chinese city was sealed off 76 days ago to contain the coronavirus that first emerged there late last year.

South African President Cyril Ramaphosa put the communications minister on “special leave” for two months, one of which will be unpaid, on Wednesday for breaking the rules of a countrywide lockdown and having lunch with a former official.

Ramaphosa acted after a picture of Minister Stella Ndabeni-Abrahams at the lunch emerged on social media, angering South Africans confined to their homes during the 21-day lockdown that started on March 27 to rein in the coronavirus outbreak.

According to the rules, people are only allowed to leave their homes for essential tasks like buying food or seeking medical help. Police arrested more than 17,000 people during the first few days of the lockdown, many for violating the lockdown.
14:35 GMT – Indian Supreme Court urges free coronavirus testing

India’s Supreme Court has ordered private medical laboratories across the country not to charge patients for testing for COVID-19.

According to national media. the court said that tests relating to COVID-19 whether in approved government laboratories or approved private laboratories shall be free of cost.

The court also said that the issue of whether the health institutions will be reimbursed by the government will be decided later.
14:35 GMT – Amid lockdown, South Africa’s waste pickers suffer most

South Africans have been prohibited from working in the streets due to a three-week lockdown imposed by the government on March 27 to curb the spread of the coronavirus pandemic.

The measure has confined South Africans to their homes and allowed only for certain work deemed essential services to continue.

While waste management was declared an essential service, the informal recycling sector was not. And South Africa’s waste pickers suffer because of the measure.
14:15 GMT – Turkey to track citizens via mobile phones to enforce quarantines

Turkey will monitor the mobile phones of those diagnosed with the new coronavirus to ensure they do not break quarantine, authorities said on Wednesday, marking the latest measure to stem an outbreak that has surged over the last month.

Turkey will start tracking citizens and send them a message and call them each time they leave their homes, the presidency’s Communications Directorate said.

They will be asked to return home and police will penalise those who continue to violate quarantine rules, it said, adding that Turkish law allows for processing of personal data without consent for “exceptional aims”.
14:00 GMT – Australia approves massive stimulus package

Australia’s conservative government will subsidise the wages of six million people for at least the next six months after MPs approved the country’s largest financial stimulus package to cushion the economic blow from the coronavirus pandemic.

Citing the threat of a prolonged economic downturn, Prime Minister Scott Morrison’s government late last month outlined a plan to pay employees at any company that has seen a 30 percent reduction in revenues 1,500 Australian dollars ($928) every fortnight.

Egypt will extend a nationwide nighttime curfew by 15 days until April 23 to counter the coronavirus spread, Prime Minister Mostafa Madbouly has said.

Airports will also stay closed, he said in a televised news conference, adding that the curfew would now start one hour later at 8pm local time each evening.

The head of the European Research Council has resigned, the EU confirmed, reportedly in protest at the bloc’s handling of its coronavirus response.

Mauro Ferrari, who only took over as president of the ERC in January, told the Financial Times he was “extremely disappointed” by the EU’s response to the pandemic, which has hit Italy and Spain particularly hard.

A spokesman for the European Commission, the bloc’s executive that oversees the ERC, confirmed Ferrari had resigned with immediate effect on Tuesday.

“The Commission regrets the resignation of Professor Ferrari at this early stage in his mandate, and at these times of unprecedented crisis in which the role of EU research is key,” the spokesman said in a statement. The Federalist Society: Architects of the American dystopia 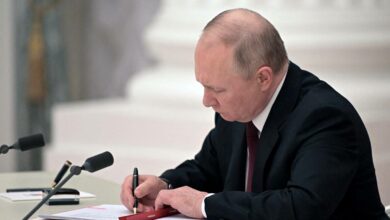