A massive fire in South Africa’s houses of parliament in Cape Town has “burned down” the entire National Assembly where elected parliamentarians sit, a spokesperson said on Sunday.

“The entire chamber where the members sit… has burned down,” Moloto Mothapo said, adding that the blaze had still not been extinguished.

The historic building houses a collection of rare books and the original copy of the former Afrikaans national anthem used during the apartheid era, “Die Stem Suid-Afrika” (“The Voice of South Africa”), which was already damaged.

The cause of the fire is unknown, but an investigation has been opened and an individual held.

President Cyril Ramaphosa told reporters at the scene earlier on Sunday that an arrest had been made.

“Someone has been held right now and is being questioned,” he said.

The fire started at around 0300 GMT Sunday in the parliament’s oldest wing before spreading to newer parts of the complex which are currently in use.

A team of firefighters who were first to arrive at the scene battled the flames for several hours before being forced to retreat and call for reinforcements.

Some 70 firefighters were later deployed, some using a crane to spray water on the blaze. 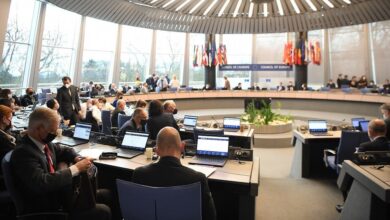