A viral photo on Twitter has social media users comparing their sleeping positions. The chart shows 18 different options, ranging from sleeping straight on one’s back to curling up around a pillow, and some positions look harder to sleep in than others. 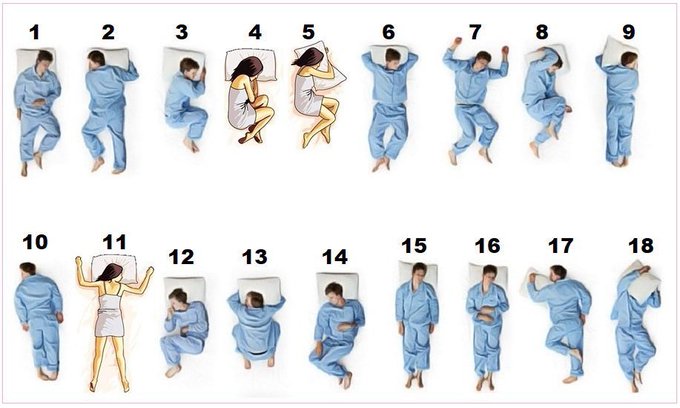 TODAY co-hosts Hoda Kotb and Jenna Bush Hager even talked with Kathie Lee Gifford about which positions they themselves prefect.

Do you have a favorite sleeping position? Hoda, Jenna and KLG weigh in

“You’re supposed to define which one you are,” Hoda said. When the chart was shown to the three women, they were baffled by some of the illustrations.

“Wait. What’s happening here?” asked Hoda, while Jenna pointed out that one of the options looked like a “frog position.”

Finally, though, Jenna decided that she slept “kind of on her back,” while Hoda and Kathie Lee both said that they were side sleepers — a position that can help with more than just getting a good night’s rest.

Between 50 to 70 million U.S. adults live with sleep disorders and 30 percent of Americans struggle with poor sleep habits, according to the Centers for Disease Control. Bad sleep contributes to many health problems, including cardiovascular disease, obesity, diabetes and dementia. This study increases the understanding of how sleep contributes to dementia.

“These studies are important because they help shine a light on the underlying mechanisms so we can understand the physiology of sleep,” said Dr. Carol Ash, director of sleep medicine at Meridian Health New Jersey. “Simple changes in behavior become a simple way to intervene and perhaps stop the process of dementia before it starts.”

In people, side sleeping opens the airways and improves air flow.

People can train themselves to sleep on their sides, just like they can prime themselves to have good sleep habits. Pregnant women should consider sleeping on their left sides because it increases blood flow to the uterus.

“Back sleepers, what that does is help to distribute the weight more evenly,” said Ash.

People without health issues can sleep on their backs if they want — it improves the alignment of their spines and neck and can lead to less pain.

For people with back pain, either sleep on your back with pillows under your knees or on your side with pillows between your knees. Both positions help maintain the spine’s natural curvature.

“If you have health or breathing problems, stomach sleeping can be a problem, but if you enjoy it, sleep on your stomach if it gives you good rest,” advised Ash, who noted this position doesn’t provide any health benefits.