The Palestinian Islamic Jihad group said on Friday it had fired more than 100 rockets into Israel in retaliation for airstrikes that killed one of its senior commanders earlier in the day.

“In an initial response to the assassination of the leader Tayseer al-Jaabari, the Jerusalem Brigades bombarded Tel Aviv and the cities in the centre and around Gaza with more than 100 rockets,” said a statement from the group’s armed wing.

Israeli authorities issued earlier warnings of rocket strikes against Israeli cities on Friday, and said sirens had been sounded in central and southern areas following a series of airstrikes against Gaza. 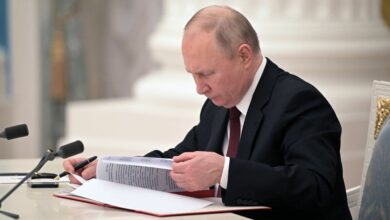