A notorious French ISIS bride has undergone a dramatic makeover at a Kurdish prison camp in Syria – and now wears near-identical clothes to Shamima Begum.

Emilie Konig, 36, was pictured in her new westernised garb at the al-Roj camp in northern Syria in recent days – the same camp where Begum is being held – as she tries to convince people she is no longer radicalized so she can return to France.

Gone was the heavy black niqab, gloves and abaya robe that she previously wore – even while living in France – and in its place she wore a hooded sweatshirt, sunglasses, faux leather leggings, white hi-top trainers and a shoulder bag. 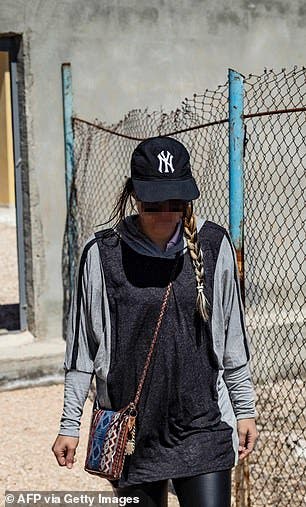 Her head was covered with a Yankees baseball cap, with her hair hanging down her shoulder in a plait.

The look mirrors that of Begum, who first appeared in interviews from Syria dressed in a black hijab and abaya robe – but recently swapped them for a baseball cap, sunglasses, hoodie, white blouse, black jeans and white Converse-style trainers.

Begum, like Konig, adopted the look while trying to convince people she no longer poses a danger so she can return to Britain, which has stripped her of her citizenship because of her membership in ISIS.

Eilish O’Gara, a counter-terrorism analyst with the Henry Jackson Society, previously theorised that the outfit is ‘a soft tactic’ devised by Begum’s lawyers designed to ‘win back the hearts and minds of the British public’.

Speaking from the camp dressed in her new look, Konig said that leaving France for Syria – which she did in 2012 – and joining ISIS had ‘wrecked’ her life.

‘I want to go home to France,’ she told AFP. ‘I have my family there. I want to start my life over and right my mistakes.’

Konig grew up in Brittany, the daughter of a French police officer who abandoned the family aged two and converted to Islam while still living in France – a change she claims happened aged 17, two years after she dropped out of school.

But Agnes de Feo, a documentary-maker who began filming Konig in 2012, believes it actually happened after she married her first husband – an Algerian drug-trafficker – because she was working in a nightclub and dating several men as a teenager.

Ms de Feo recalled Konig as an ‘angry’ young woman who blamed society for her father’s abandonment of the family and her inability to find a stable relationship.

After suffering abuse at the hands of her Algerian husband the pair divorced and she fled Brittany for Paris, where she began wearing a full-face veil in 2010 – shortly after France banned the garment.

De Feo said Konig often talked about going to Syria where she dreamed of meeting ‘a real man, a brave Muslim who could support a family and children and so on.’

She never believed Konig would go through with her threats, and was surprised when she abandoned her two children in France and made the journey just a few months after they met.

Once in Syria, Konig – who renamed herself Ummu Tawwab – married a Belgian ISIS fighter and the pair had three children – including twins – before he was killed.

She also became a potent recruiting tool for ISIS and regularly appeared in propaganda videos, for which she was placed on UN and US terrorist blacklists, accused of recruiting hundreds of people to the cause.

One video showed her training with a shotgun and in another she brandished an AK47 while making a one-fingered hand gesture common among jihadis which signifies ‘one God’ and ‘one religion’.

Konig was captured by Kurdish fighters in 2017 in the terror group’s de-facto capital of Raqqa, and taken to a prison camp along with her children.

Her children have since been brought back to France but Konig remains at the camp and is fighting to be allowed to return herself – saying that she is now ‘dressing … to get used to my returning’.

She said she hopes to work as an accountant back in France – even if Paris has been reluctant to repatriate citizens with IS links and would likely seek to try them on terror-related charges.

‘When I do return, I won’t be able to wear’ a veil, she said, her dark, blond-streaked hair braided into a plait under her Yankees cap.

Syria’s Kurds hold thousands of foreigners in their custody after leading the US-backed battle that ousted IS from its last patch of territory two years ago.

Of those, 800 European families associated with the jihadist group and 100 Syrian and Iraqi families live in Roj, according to a camp official.

Konig is vague about what pushed her to leave France in 2012, one year into Syria’s civil war.

She says she arrived in Syria after she ‘met someone online’ and agreed to marry him, becoming one of the first of hundreds of French citizens to join IS.

If allowed to return, she said she would like to take more classes to improve her accounting skills, and to start afresh for her five children, aged four to 16, who are all in France.

She sent home in January the three youngest children, born to her late French and Belgian husbands – a six-year-old boy and twin girls aged four.

‘Since they left, not a day has gone by that I haven’t thought of them,’ she said.

Inside the dusty camp, a child pushed a kick scooter along a thin tarmac road beyond rows of white tents, while another played on a makeshift swing.

Women covered from head to toe in purple or blue robes – instead of the typical black outfit worn under IS – queued to get into a small market.

But others were dressed in more fashionable, modern clothing, and said they – like Konig – were ready to be repatriated.

‘We want to go home,’ one of them told AFP, sunglasses on the top of her head and dark hair tied in a ponytail.

Another woman, with large white sunglasses and her hair bound up in a scarf above the neck, said: ‘We want to be repatriated.’

Roj is one of two Kurdish-run camps housing foreign family members of suspected IS fighters.

It is smaller and better guarded than its overcrowded counterpart Al-Hol, which has been rocked by assassinations and breakout attempts in recent months.

‘We try to transfer the most dangerous people’ here, the camp official told AFP. ‘We’re trying to relieve the pressure off Al-Hol.’

She said those who have started wearing modern clothing again ‘are trying to convince their governments to repatriate them’.

But she added she believes that only a few were truly repentant.

Konig said she was so desperate to see her children, she went on hunger strike in early March – but quit after eight days believing ‘there was no point’.

Nonetheless, she added that ‘I hope one day to see my children again, that all six of us will sit around the same table’.

The Kurdish authorities have repeatedly called on more than 50 countries to repatriate the men, women and children from their jails and displacements camps.

But their home nations have largely been reluctant.

In France, relatives and rights groups have urged Paris to bring back around 80 women and 200 children, including from Roj.

But the French authorities, reeling from a string of deadly IS-inspired attacks, have instead brought only some home on a case by case basis.

Konig urged the French authorities to ‘really analyse everybody’ individually before deciding.

‘I’m a prisoner here,’ she said, claiming she had lost some teeth and was suffering from hip and knee problems.

Konig said she knows returning to France won’t be easy but that she is ready.

‘I don’t care about people not accepting me,’ she said. ‘I live for myself, my children and my family.’

On Instagram: French Newspaper Refuses to Run Photo of Saudi Princes Because of Her Hijab

Belgium Continues War Against The Headscarf