“Following a weakening of tropical situation Shaheen in al-Ain, educational institutions will return to physical learning, construction work will resume, COVID-19 testing and vaccination tents in al-Ain will reopen, and access to Jebel Hafeet will reopen,” the statement posted to Twitter by Abu Dhabi’s Media Office read.

“Authorities continue to closely monitor weather conditions and evaluate relevant measures and decisions. The public is urged to follow updates from official sources,” it added.

The tropical Shaheen storm situation prompted many cities in the Gulf region to reinstate distance learning until the impact of the storm subsided.

Construction work was also put on hold in al-Ain on Sunday due to the circumstances.

Early Monday, the UAE’s National Center of Meteorology released a statement confirming the weakening of the tropical storm.

The center added that the sea remained very turbulent and that the waves ranged between eight to nine feet in depth in the Sea of Oman. It reached five feet on the UAE’s eastern coast and is expected to be turbulent in the Gulf Sea, with waves reaching around five to seven feet.

It also indicated that moderate clouds would appear over al-Ain and the south of the country, accompanied by light to medium rain which is set to gradually decrease through the evening. 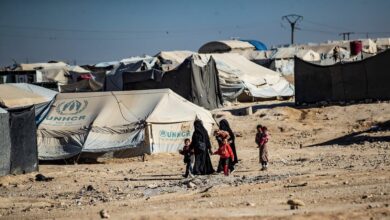