A handful of shadowy Shia militias have emerged over the last year in Iraq intent on targeting US coalition forces and Western interests in the country. The new militias, loyal to Iran, have claimed responsibility for several attacks on US targets, including those in Baghdad’s Green Zone.

Much about the groups is unknown, including how many there are or how many fighters are in their ranks. Al Arabiya English was able to identify more than 10, and some experts put the number as high as 20, but their shifting nature makes it difficult to track.

The groups demand the full withdrawal of US and Coalition forces from Iraq, with some suggesting that they seek revenge for the killing of Iran’s Islamic Revolutionary Guard Corps (IRGC) Quds Force commander Qassem Soleimani and Abu Mahdi al-Mohandes, who was the deputy commander of Iran-backed militias known as the Popular Mobilization Forces,.

One group even bears the name Lewaa Thaar al-Muhandis, or al-Mohandes’s Revenge Brigade, and has claimed at least two attacks on US facilities and properties, a May report from BBC Monitoring service noted. The November 18 attack on the Green Zone was claimed by Ashab al-Khaf, another of the groups that has emerged over the past year.

Usbat al-Thaereen, or the League of Revolutionaries, one of the more prominent new militias, claimed the attack on Camp Taji that hosts US Coalition forces near Baghdad that killed two US soldiers and one British soldier in March earlier this year.

The groups have no clear leadership or command structures – which experts say is by design.

The loose design structure of these groups gives Iran “plausible deniability” for attacks they carry out, Phillip Smyth, a fellow at the Washington Institute, explained to Al Arabiya English.

While direct state-on-state conflict would be a costly and dangerous move for Iran, by using its militia proxies, Iran is able to carry out attacks on US targets with little fear of retribution, Emily Hawthorne, a Middle East and North Africa analyst at Stratfor, told Al Arabiya English. 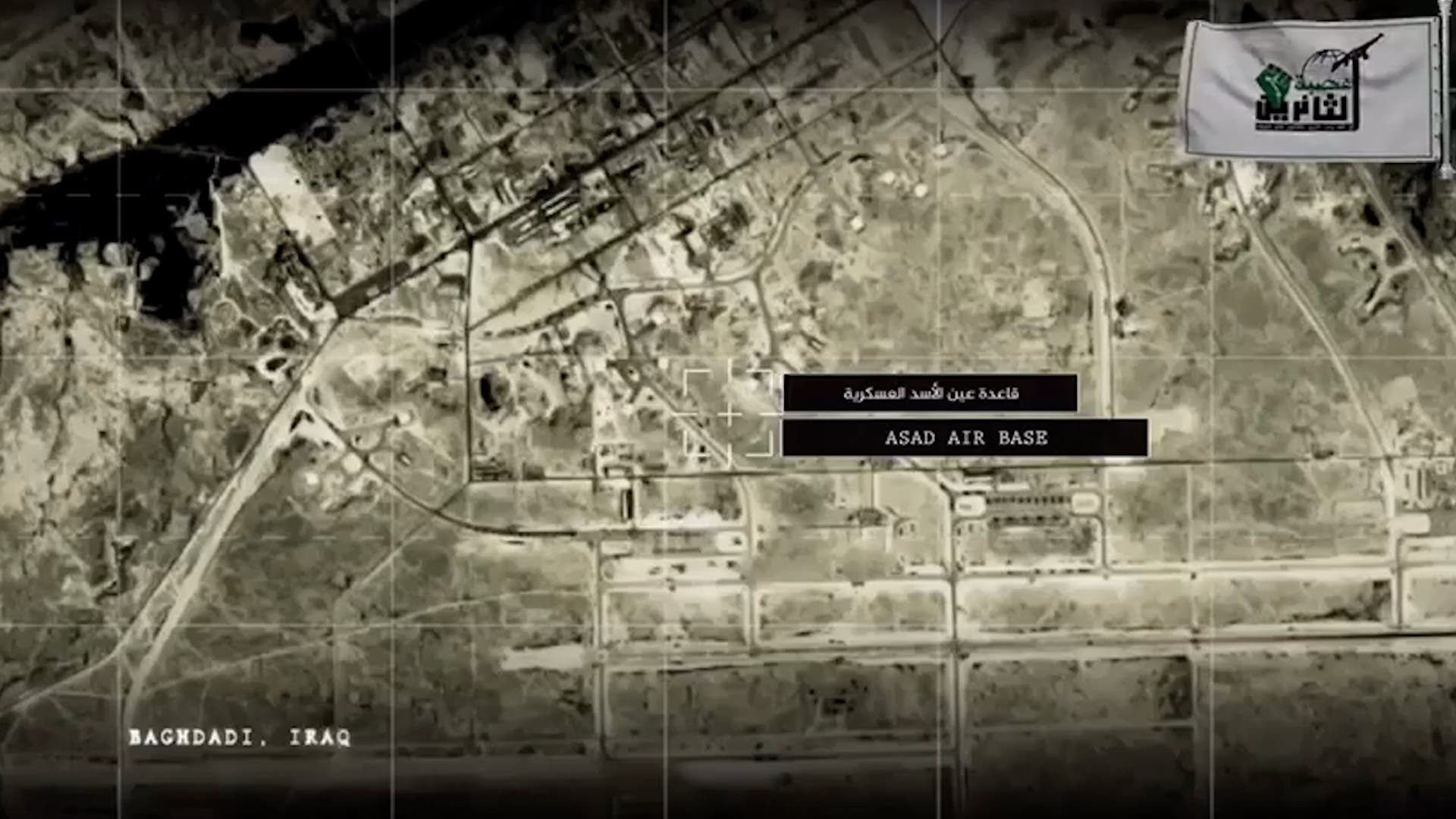 Screengrab from a video published by Usbat al-Thaereen, one of a handful of new front groups and militias that have emerged in Iraq that are backed by Iran. (Video courtesy of Phillip Smyth).

The groups began to emerge in early 2020 in the wake of the US targeting and subsequent deaths of Soleimani and al-Mohandes on January 3 in an airstrike at Baghdad International Airport.

However, Smyth, who is set to publish a report on the new front groups soon, said that he had noticed activity from a variety of different groups across the region before January, signaling that the Iranian regime had already begun committing resources to its proxy militias.

“The front groups themselves – they really kind of got their start in 2019 where they were testing the waters,” he said. “The Iranians do things in phases, and had started sending signals even since 2018.”

Soleimani and al-Mohandes’ deaths presented Iran with an opportunity to up the ante, allowing them to push forward with a new phase of their regional strategy, Smyth said.

The groups primarily target US forces, but in practice this often means Iraqi contractors – such as truck drivers – are the victims of these attacks, said experts who spoke to Al Arabiya English.

“They have assassinated and targeted Iraqis, including protesters,” Dr. Zana Gulmohamed, an analyst who has previously written about Shia militias in Iraq, said. “The level of involvement is unknown but it is there.”

Experts seem confident the new wave of militias, referred to as “Katyusha” factions by Michael Knights, a fellow at the Washington Institute, are linked to Iran, but questions remain about the autonomy of these groups, where these fighters came from, and if they are distinct entities. 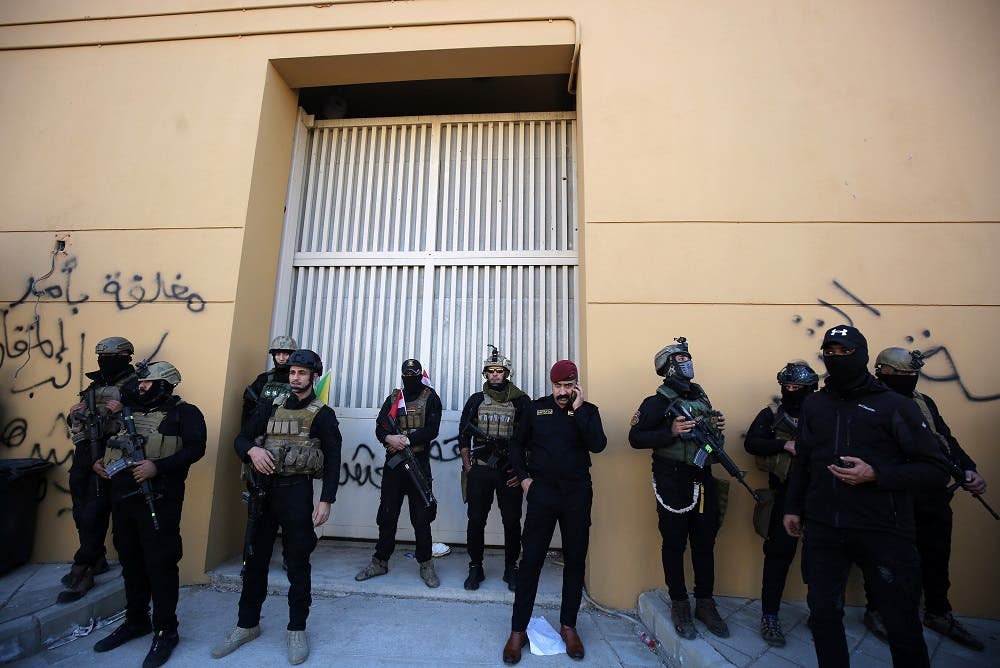 Members of Iraq’s security forces stand guard outside one of the gates of the US embassy in Baghdad’s Green Zone. (AFP)

Over the past decade, Iran has used similar tactics, creating front groups and others as part of a pattern of asymmetric warfare. While Iran is regionally isolated and has continued to avoid direct military action, it has used these tactics to continue its regional expansionist objectives through alternative means.

“[The new front groups] appear to be a tactic to blur responsibility to allow Kata’ib Hezbollah and Harakat Hezbollah al-Nujaba to pay no political price for the attacks, but this has not worked. Iraqis think of the ‘Katyusha’ factions as one, despite the new names,” Knights told Al Arabiya English.

Gulmohamad suggested that while some of the factions may be operating alone, it is nearly impossible to know much about these secretive groups yet. Smyth, however, said he doesn’t necessarily believe that any of these groups are “truly independent.”

Kata’ib Hezbollah is one of Iran’s more established proxy groups, and experts have already said that evidence has begun to emerge that these new militias are closely linked to the group. 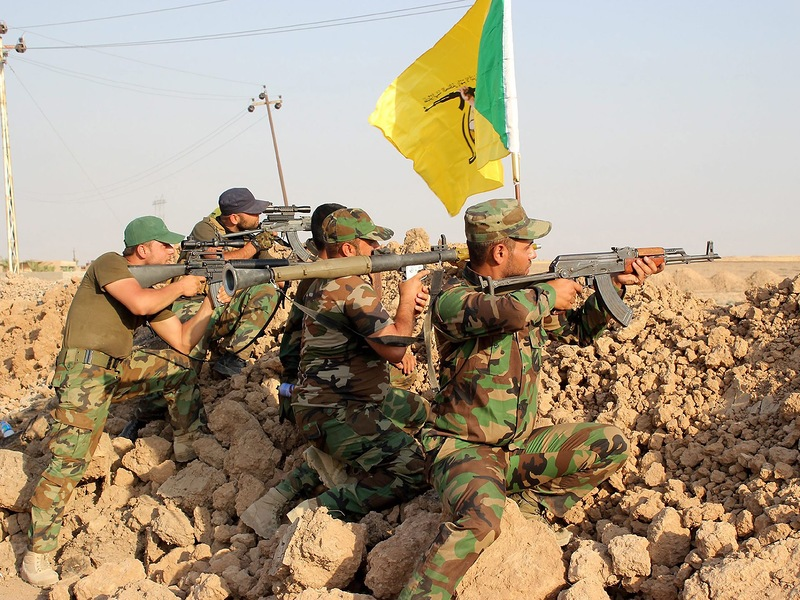 “The question is if these are all front groups for established groups like Kata’ib Hezbollah, are they actually something that will keep growing, are we going to see real, deadly attacks come out of these groups, that still is up in the air,” Hawthorne said.

So far, the groups have demonstrated relatively basic capabilities, mostly relying on roadside improvised explosive device (IED) attacks and Katyusha rockets. Al-Mohandes’ Revenge Brigade, for instance, in May published a video claiming that it targeted to US helicopters with surface-to-air missiles.

While attacks claimed by these groups have so far been low-level, Smyth said this could be by design. The militias may be looking to strike a balancing act where they can strike targets without prompting a significant response from the US.

And while the militias have only carried out small-scale attacks before, the fighters may be more seasoned than demonstrated.

“You may have some younger fighters that are involved, based on some of the releases that have come out, but that doesn’t mean they’re not going through more trusted, more advanced training regimens that the IRGC gives them,” Smyth said, adding that a lot of them have likely already participated in fighting in Syria and have potentially cooperated with other groups.

“They’re experienced and loyal fighters who they know can do stuff and get away with it. Sometimes the more experienced older guys will have people out there, but they can cull from a lot of different organizations.”

Thrown out, domestic workers in Lebanon look for a way back to Ethiopia