What do you say to taking chances?

On Tuesday, one talented Céline Dion fan went viral for delivering an impromptu rendition of her song “I Surrender” while meeting the singer—and of course, Celine had the best reaction.

Taking place outside of the Four Seasons Hotel in New York City, Frieda Solomon seized the opportunity to serenade the Grammy winner when she spotted her leaving the hotel and heading into her car. A self-professed Celine superfan, Frieda, who is a singer herself, began belting the hit 2002 ballad once the “Imperfections” singer rolled down her window. Thankfully, Frieda’s pal (who goes by the Instagram handle @cdubzz_) was on hand to record to interaction and shared it on social media.

“I’d hold you in my arms and never let go / I surrender,” she can be heard singing to Celine, who was donning a fierce pair of cat-eye sunglasses and an ornate floral jacket. Eager to meet with her fans, Celine instructed her driver to stop the car and attentively listened as Frieda continued. Impressed by her voice, the “Ashes” songstress flashed Frieda a smile and gave her a fist bump.

Later reposting the video to her own account, Frieda captioned the post, “Seen at the @fourseasons. Celine Dion: Thank you for singing for me. Me: Thank you for singing for me my whole life! Such an honor to sing to you @celinedion  Starstruck is an understatement.”
After the video had gone viral, Frieda told E! News that the moment happened while she was grabbing lunch and that she “couldn’t resist” the chance to sing to one of her musical idols.

“[I’ve] been singing her songs and listening to her since I was little, so this was too good of an opportunity to pass up,” she shared with E! News exclusively. “And she was so gracious, I couldn’t resist… I’ve loved her and her music for years and had to stay to see her.”

Frieda continued, “When she went into her car and closed the door, I knew I lost my chance at speaking to her. But then I asked her to roll down her window, which she did. I told her how I grew up listening to her sing with Andrea Bocelli and how she’s been an icon in my life and out of nowhere I started singing ‘I Surrender,’ one of her most famous songs.”

Can Yaman Biography Released: ‘Can Yaman I Love You Forever’ (Pictures) 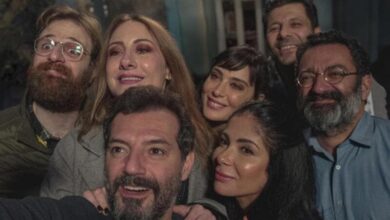 In Picture: Mona Zaki Sparks Outrage by Taking off Her Undies In New Netflix Movie

Mo Salah Does Not Only Score Goals But Loves Charity Work!