Scotland’s First Minister Nicola Sturgeon has said she will push ahead with plans to hold a “legal” referendum on independence from Britain if her party secures a majority in polls later this year, despite London’s opposition.

Scotland voted against independence by 55 percent to 45 percent  in a 2014 referendum. But a majority of Scots also backed staying in the European Union in the subsequent 2016 Brexit vote, stoking demands by Scottish nationalists for a new independence vote after the United Kingdom as a whole voted to leave the bloc.

Sturgeon said on Sunday she would seek a fresh referendum if her Scottish National Party (SNP) wins a strong showing in Scottish parliamentary elections in May – even though British Prime Minister Boris Johnson has said such a vote should only be held once in a generation.

“I want to have a legal referendum, that is what I am going to seek the authority of the Scottish people for in May and if they give me that authority, that’s what I intend to do,” she told BBC television.

“If the SNP win the Scottish election in a few months’ time on a proposition of giving the people that choice, what democrat could rightly stand in the way of that?” she said, adding that “the polls now show that a majority of people in Scotland want independence“. 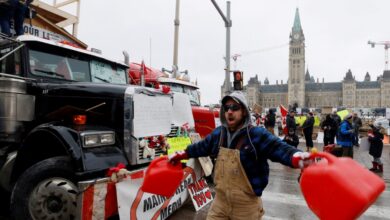