Diamonds formed over three billion years ago deep in the ground, but scientists have create the precious stones in just minutes inside a lab.

An international team recreated diamonds found in an engagement rings and Lonsdaleites at room temperature using a diamond anvil, which is a high-pressure device that compresses small pieces to extreme pressures.

They used carbon crystallize for the experiment and then provided a twisting or sliding force of pressure known as ‘shear.’

Both diamonds formed together as bands with a core‐shell structure following the high pressure treatment at room temperature, which experts said is ‘equivalent to 640 African elephants on the tip of a ballet shoe.’

The lab-made diamond was created by the Australian National University (ANU) and RMIT University, which have produced a diamond in a lab setting – but only by using intense heat.

Jodie Bradby, a physicist at ANU, told AAP: ‘It’s all down to how we apply the pressure – we allow the carbon to experience something called ‘shear’ – which is like a twisting or sliding force.’

‘We think this allows the carbon atoms to move into place forming both lonsdaleite and regular diamonds, like those found on engagement rings.

‘We’re not doing this in anything super amazing or explosive. We just squeeze the material together at extreme pressure.

‘It all happens in minutes.’

Co-lead researcher Professor Dougal McCulloch and his team at RMIT used advanced electron microscopy techniques to capture solid and intact slices from the experimental samples to create snapshots of how the two types of diamonds formed. 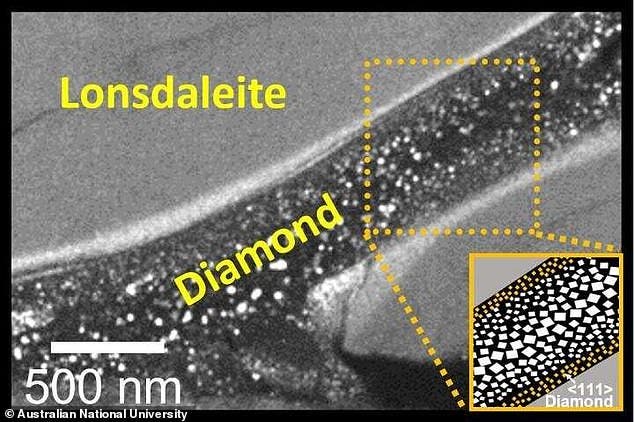 ‘Our pictures showed that the regular diamonds only form in the middle of these Lonsdaleite veins under this new method developed by our cross-institutional team,’ McCulloch said.

‘Seeing these little ‘rivers’ of Lonsdaleite and regular diamond for the first time was just amazing and really helps us understand how they might form.’

Lonsdaleite, named after the crystallographer Dame Kathleen Lonsdale, the first woman elected as a Fellow to the Royal Society, has a different crystal structure to regular diamond.

Researchers are hoping their nature-defying breakthrough allows them to develop the ultra-hard diamond for industrial use in cutting tools like those found on mine sites.

‘Any process at room temperature is way easier and cheaper to engineer than a process you have to run at several hundred or a thousand degrees,’ Prof Bradby said.

‘But our Lonsdaleite diamonds might become a miner’s best friend if we can save them having to change costly drill bits as often.’