The majority ($2.5 million) will go towards the IAEA initiative to help modernize its Seibersdorf laboratories in Austria.

Funding will go towards strengthening the agency’s regulatory capabilities in order to maximize the benefits of nuclear technology.

It will also be used in part to provide resources and services to IAEA members states to ensure the safe use of nuclear technology.

“These donations come as an extension of the Kingdom’s continuous support for the efforts of the International Atomic Energy Agency and its initiatives aimed at developing its capabilities in a manner that enhances its vital role in harnessing the atom for peace,” the Saudi Press Agency said.

The IAEA, which is the United Nations’ nuclear non-proliferation body, is currently probing traces of enriched uranium found at several research sites in Iran.

Iran’s foreign minister said last week that the IAEA should drop its probes, as talks continue between the Islamic republic and the US aimed at reviving a 2015 deal that would lift sanctions.

The White House responded on Friday, saying that dropping the probes should not be a condition for reviving the deal. 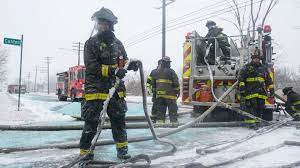 US blizzard kills 18, leaves hundreds of thousands without power