The 36-year-old Justified actor looked downcast as he arrived and carried in supplies for the family.

His arrival came after People reported his Glee star ex-wife, who was declared missing Wednesday after a boating trip with their son, had agreed to a joint custody arrangement three months earlier.

Ryan was stone-faced as he began to unload his black Chevy Tahoe.

He wore a a short-sleeved gray hoodie and black athletic shorts with gray and black Nike hightop sneakers and black and gray striped socks, along with a black baseball cap.

The Ray Donovan actor carried in a black duffel bag, along with a tiny dog in a carrier and a bag of dog food for an extended stay.

He also arrived with a pizza and some takeout food for his family members.

Meanwhile law enforcement sources ruled out suicide as a factor and believe the disappearance on the lake was accidental.

Sgt. Kevin Donoghue told People on Friday: ‘We interviewed her son and there was nothing that we learned from her son that would have suggested that this was suicide. Everything that we’ve learned so far leads to this being some sort of water recreational accident.’

‘To say definitively what actually happened, we really can’t say. We just don’t know, it’s a mystery,’ Donoghue added. ‘We’re still investigating, we’re still searching. We’re trying to uncover clues as we go. But so far, we really don’t have a lot of information to make any guesses as to what could have happened.’

The conditions in Lake Piru are making it difficult for the rescue crew to find Naya, but they used a scanning sonar on Friday to ‘paint pictures of the lake bed floor.’

On March 26, three months before Naya’s disappearance, she and Ryan filed a new agreement to ‘share joint physical custody of their son Josey, which would include holidays and his summer vacation.

The former married couple decided on ‘an equal timeshare to be mutually agreed upon by the Parties consistent with the schedules of each Party and the minor child,’ according to the documents.

‘The Parties shall also equally divide all holidays, vacation time, pupil-free days, and summer vacation. The Parties shall meet and confer to determine the holiday schedule. The Court reserves jurisdiction in the event of a dispute,’ the agreement continued.

Both Ryan and Naya were also to each get two separate weeks alone with Josey throughout the summer.

The exes first dated in 2010 briefly, before reuniting in 2014 following the dissolution of Naya’s relationship with rapper Big Sean.

They married in Cabo San Lucas, Mexico, in July of that year, and announced they were expecting their first child in February 2015.

Josey was born in September 2015, but the marriage soured, and the Step Up: High Water actress filed for divorce in November 2016.

She and Ryan reunited in October of the following year and ended their separation, but in November 2017, Naya was arrested in West Virginia on a misdemeanor domestic battery charge after she allegedly hit in the head during a fight over Josey.

She refiled for divorce in December 2017, and the domestic battery charge was dropped at Ryan’s request. 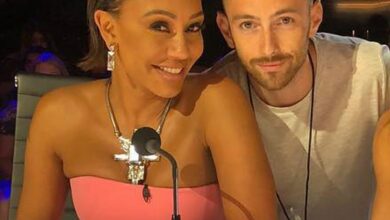