Russia says it has summoned the United States’s ambassador to the country over President Joe Biden’s recent comments labelling his Russian counterpart Vladimir Putin a “war criminal” amid the invasion of Ukraine.

In a statement on Monday, the Russian foreign ministry said it summoned US Ambassador John Sullivan as ties between Moscow and Washington were on the verge of collapse.

Biden last week told reporters that Putin was a “war criminal” for launching an all-out invasion of Ukraine late last month, as Russia’s bombardment has levelled entire neighbourhoods and forced more than 10 million people to flee their homes.

“Such statements from the American president, unworthy of a statesman of such high rank, put Russian-American relations on the verge of rupture,” the foreign ministry said in the statement.

It also said Sullivan had been handed a formal letter of protest about “recent unacceptable statements” made by Biden, and was warned that “hostile actions taken against Russia would receive a firm and decisive response”.

Tensions between the US and Russia have been rising amid Russian forces’ continuing attacks on Ukrainian cities and towns, which have drawn global condemnation and complicated efforts to bring about a negotiated end to the conflict.

The Biden administration and its allies in Europe have issued a wide range of sanctions against Russian officials, businesses and wealthy elite in an effort to pressure Putin to end the invasion.

The Kremlin immediately rejected Biden’s assertion that Putin was a “war criminal”, calling it “unacceptable and unforgivable rhetoric”.

But the US’s top diplomat, Secretary of State Antony Blinken, doubled down on the president’s remarks, saying last week that he too believed that Russian forces had committed war crimes in Ukraine.

Blinken said on Thursday that Department of State experts were in the process of documenting and evaluating potential war crimes in Ukraine to help international efforts towards accountability, but added that it was apparent that Russia is committing abuses.

“Intentionally targeting civilians is a war crime. After all the destruction of the past three weeks, I find it difficult to conclude that the Russians are doing otherwise,” he told reporters.

On Monday, Biden was holding a call with President Emmanuel Macron of France, Chancellor Olaf Scholz of Germany, Prime Minister Mario Draghi of Italy, and Prime Minister Boris Johnson of the United Kingdom to discuss their coordinated responses to the Russian invasion.

Al Jazeera’s Kimberly Halkett, reporting from Washington, said the US president would likely discuss the Russian foreign ministry’s statement with those European leaders as “the ramifications go beyond just US-Russia relations”.

Strained ties between Moscow and Washington could complicate both continuing negotiations to reach a ceasefire in Ukraine, as well as talks to revive the 2015 Iran nuclear agreement, formally known as the Joint Comprehensive Plan of Action (JCPOA), Halkett said.

“The fact that the US ambassador has been summoned in Russia, and the fact that ties are not only strained, but have the potential to be severed completely, could put a number of US policy objectives at risk,” she said.

Biden will travel to Poland on Friday to meet with President Andrzej Duda to discuss the international response to Russia’s invasion. He also will meet in Brussels earlier this week with the US’s NATO allies, as well as leaders of the G7 and European Union (EU). 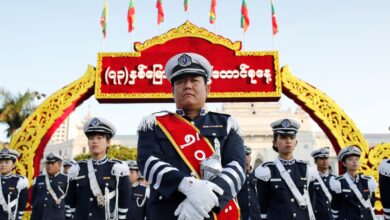 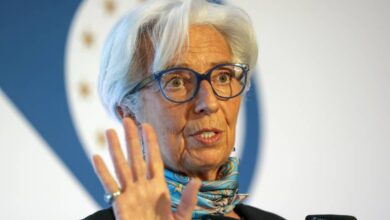 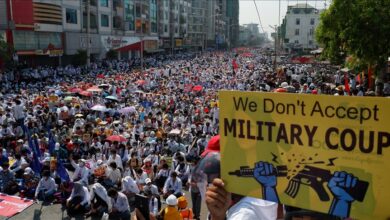 How the Karen became crucial to Myanmar’s anti-coup resistance