Zelenskyy also called on Qatar, which organizes the annual meeting of international political and business leaders, to increase production of natural gas to counter Russian efforts to use energy as a weapon.

“They are bragging that they can destroy with nuclear weapons not only a certain country but the entire planet,” Zelenskyy said in a live video message to the forum on the 31st day of the Russian military assault against his country.

When Ukraine dismantled its nuclear stockpile in the 1990s it was given “security assurances from the most powerful countries in the world,” including Russia, he said in comments translated into English for the conference.

“But these assurances did not become guarantees. And in fact, one of the countries supposed to give one of the greatest security promise started to work against Ukraine and this is the ultimate manifestation of injustice,” Zelenskyy added.

“The future of Europe rests with your efforts,” he told the audience that included the Emir of Qatar, Tamim bin Hamad al-Thani.

“It depends on your output. I ask you to increase output of energy to ensure that everyone in Russia understands that no country can use energy as a weapon.”

European nations have vowed to wean themselves off Russian oil and gas and have already turned to Qatar for alternative supplies.

Germany has committed to build two huge terminals to receive liquefied gas from Qatar, the Gulf state said last week after a visit by German ministers. 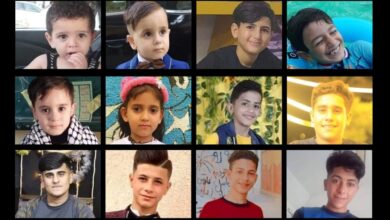 The names and faces of the 15 children killed in Gaza