Russia has created a new role for its ambassador to Syria, a move that analysts have interpreted as showing an increasing strain in Russian-Syrian relations amid the ongoing rift at the heart of the Syrian regime between President Bashar al-Assad and his cousin, tycoon Rami Makhlouf.

Russian President Vladimir Putin has been one of al-Assad’s most important supporters, with Russian planes helping Syrian government forces recapture large swathes of territory in the country’s nine-year-long war.

But as the war grinds to a stalemate, with opposition groups confined to Syria’s northwestern Idlib province and Turkish-controlled pockets along the border as well as Kurdish-controlled areas, relations between Moscow and Damascus have reportedly come under strain.

JUST IN (short thread): #Putin names current #Russia/n Amb in Damascus as “Presidential envoy for developing ties with #Syria“.
Alexander Efimov, who will turn 62 on May 27, been serving as Amb to SYR since Oct 2018.
Prior to this, he has served for 5 years as RUS Amb to UAE. 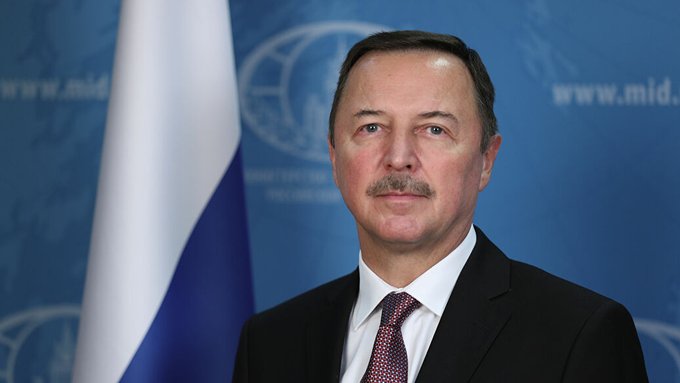 35 people are talking about this

On Monday, the regime’s official Syrian Arab News Agency (SANA) reported that Alexander Efimov, who was Russia’s ambassador to Syria, had been appointed “Special Envoy of the Russian President for Developing Relations with Syria.”

According to analysts, Moscow is increasingly annoyed with the Syrian regime as it begins to look for compensation for its significant military, economic and political investment during the war.

“By appointing Efimov as his viceroy, Mr Putin is telling the regime to get its act together,” Syrian political commentator Ayman Adel Nour told UAE-based newspaper The National.

Russian media outlets ran a series of articles that were critical of Bashar al-Assad in April 2020, prompting speculation that Syrian-Russian relations had come under strain.

Moscow has reportedly urged al-Assad to enact constitutional reforms that could sanitize the regime to the international community, potentially leading to the lifting of sanctions and allowing for the lucrative rebuilding of the country.

However, analysts have put forward competing theories as to where Moscow stands in the rift between al-Assad and Makhlouf, and the extent to which it has actually fallen out with President al-Assad. The Makhlouf family reportedly own at least $40 million worth of high-end apartments in Moscow’s famous “City of Capitals” and are rumoured to have ties with Moscow.

“Even though the Syrian power struggle (especially within the Alawite clique) may affect Russia’s position, Moscow is not inclined to consider a radical break away from the Assad regime,” wrote Anton Mardasov, a non-resident scholar at the Middle East Institute’s Syria Program, for Al Sharq’s Strategic Research forum.

On Twitter, Mardasov instead linked Efimov’s new role to an attempt to reduce the influence of Russia’s military in the settlement for Syria’s future. He did not explain how the move would affect the military’s role.

“This belated step is an attempt to reduce the growing influence of the Russian security forces in the so-called ‘political settlement’,” he tweeted.

Putin has appointed Russia’s ambassador to Damascus, Alexander Efimov, as his special representative for the development of relations with Syria. This belated step is an attempt to reduce the growing influence of the Russian security forces in the so-called “political settlement”

“In a way it’s continuation of the trend. In 2018 I’ve written for @AlMonitor on Efimov’s potential role in #Damascus as a possible “economic manager” as opposed to his predecessor (Amb Kinshak) as “war manager,” said Maxim A. Suchkov, also a non-resident scholar at the Middle East Institute.

In a way it’s continuation of the trend. In 2018 I’ve written for @AlMonitor on Efimov’s potential role in #Damascus as a possible “economic manager” as opposed to his predecessor (Amb Kinshak) as “war manager”https://www.al-monitor.com/pulse/originals/2018/04/russia-rotate-diplomats-syria-uae.html … 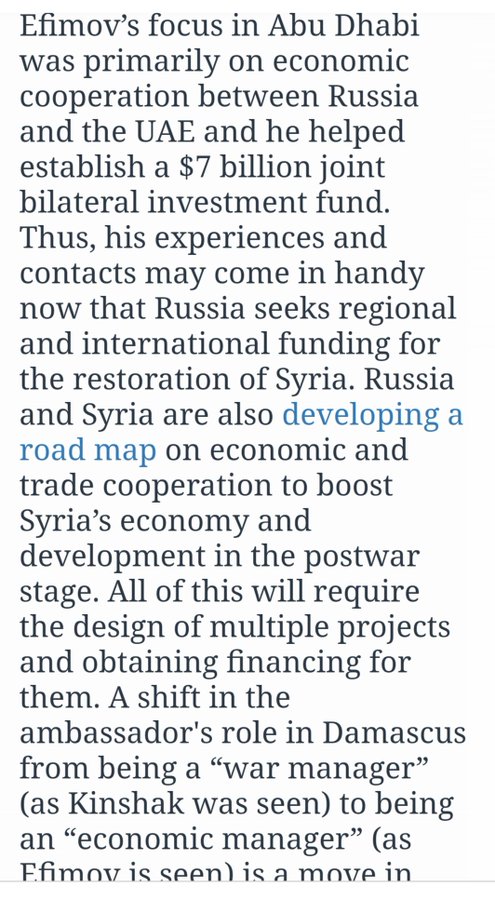 See Maxim A. Suchkov’s other Tweets

Efimov became Russian ambassador to Syria in 2018, having previously worked as Moscow’s ambassador in the UAE.

He has publicly promoted Moscow’s line regarding the war in Syria, arguing that the regime is fighting a legitimate war against “terrorists” and denying accusations that it used chemical weapons in Hama.