The conductor on the podium has no baton, no tailcoat and no musical score, but Android Alter 3 is kicking up a storm as it guides a symphony orchestra’s players through their paces.

The robot has a humanoid face, hands and lower arms, which gesticulate with what could pass for passion as it bounces up and down and rotates during the live performance of Keiichiro Shibuya’s opera “Scary Beauty” in the Emirate of Sharjah.

For Shibuya, a composer from Japan, the role of robots in our everyday lives may well be increasing, but it is up to us to decide how artificial intelligence might add to the human experience, and humans and androids create art together.

“This work is a metaphor of the relations between humans and technology. Sometimes the android will get crazy, human orchestras have to follow. But sometimes humans can cooperate very comfortably,” he said.

Shibuya wrote the music, but the android controls the tempo and volume of the live show, and even sings at times.

“The premise is that the android itself is moving according to its own will,” said its technician Kotobuki Hikaru.

The work’s lyrics are based on literary texts from American “Beat Generation” writer William Burroughs and French author Michael Houellebecq.

“The robots and AI that exist now are not at all complete. The focus of my interest… is what happens when this incomplete technology comes together with art,” said Shibuya. 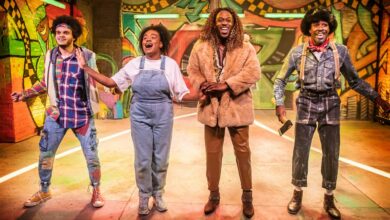