Rescuers have saved 50 caged dogs from a horrifying meat farm where they were forced to watch other pups being slaughtered in South Korea. 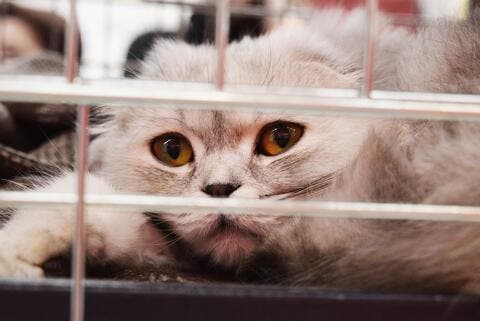 The facility was shut down by authorities, with Korean animal protection workers finding the dogs locked up in metal cages without proper access to food and water.

The four farmers running the facility had moved off the property after local officials ordered it to be demolished following its closure, leaving the animals behind.

The facility – in Yongin city in the north of the country near the capital Seoul – had been operating in breach of South Korea’s national Animal Protection Act.

When they were found by the rescuers, many of the dogs were suffering from malnutrition, as well as painful skin diseases and sore feet from standing on the wire floor of the cages.

Others were left in cages with painful and untreated head and ear wounds, and a number of the animals were extremely afraid of people, left tightly curled up and and trembling in the back of their cages when they were approached.

The dogs – Jindos and Mastiffs, breeds often promoted as ‘meat dogs’ by the industry – are believed to have spent their whole lives in the small cages.

Some were caged next to the on-house slaughterhouse, meaning they had watched and heard other dogs being killed, leaving them clearly traumatised, according to Humane Society International (HSI), an animal protection organisation.

All the dogs found on the farm, including the farmer’s small pet terrier called ‘Tiny Tim’ – who he gave up – were saved from euthanization by the rescuers and are receiving veterinary care and vaccinations.

Eventually, they will be flown to the HSI’s temporary shelters in the United States and Canada to be re-homed with adoptive families.

‘These dogs really needed our help because they would have been euthanized by the authorities without a rescue plan. We knew we had to act fast to save them,’ Nara Kim, HSI/Korea’s campaign manager said in a statement.

‘These dogs were in a pitiful state, skinny and frightened and existing in terrible conditions. It was shocking to see the slaughter area on site too with abandoned electrocution equipment and knives.

‘I am horrified to think how many dogs lost their lives there. The sooner we can end the dog meat industry, the sooner we can see an end to such pitiful scenes of animal suffering,’ Kim, who was one of the rescuers, added.

It is estimated around 2 million dogs are kept on thousands of farms across South Korea. The Humane Society International/Korea has closed down 17.

The organisation is pushing for legislation to be introduced in the country to end the dog meat trade, with a recent opinion poll showing there is growing support for an end to the practice.

The poll, commissioned by the HSI organisation, found nearly 84 percent of South Koreans saying they don’t or won’t eat dog, and almost 60 percent supporting a legislative ban on the trade.

Most South Koreans do not eat dog meat, and a growing number see the animals as pets rather than food, according to the organisation.

However, while it is not a popular food in the country’s culinary mainstream for most people in South Korea, during the Bok days of summer spanning July and August it is popular due to its perceived curative properties during the hot summer months.

In 2018, Seongnam City Council shut down the Taepyeong dog slaughterhouse – South Korea’s largest – and in 2019, the Gupo dog meat market in Busan was closed.

In October 2020, Seoul’s city mayor announced the country’s capital was ‘dog slaughter free’, and a year earlier in 2019, the country’s supreme court found that a dog farmer who electrocuted dogs was in violation of the Animal Protection Act.

The judgement could have huge implications for an industry that relies almost entirely on electrocution as a killing method. Viral: Woman Shocked After Message on Her Son’s Belly From His Daycare Worker