Libyan businessman Youssef Migariaf, is trying to indirectly respond to his ex wife Rawan Bin Hussain’s accusations, where she said that he raped her prior to marriage and infected her with HPV Type 16 because of his affairs with prostitutes.

Youssef posted a quote on Instagram that said: “If one day your relationship ends with a person you loved, make your heart a hideout of all his secrets and tales .. There are morals in relationships.” 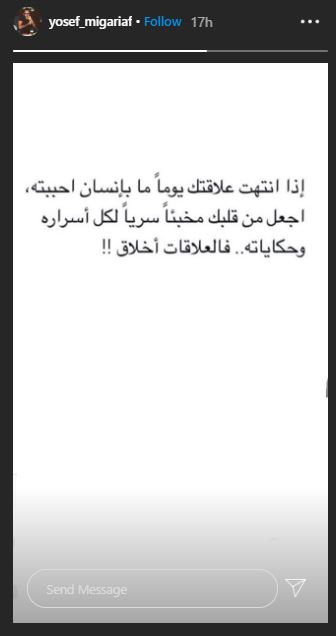 The audience considered that Migariaf was trying to defend himself against Rawan’s accusations, while some believed that he knows a lot about Rawan, but he fears exposing her, and some sympathized with him, describing him as oppressed.

Youssef Migariaf had previously written a message on Instagram Stories that said: “Be aware and don’t listen to one side of the story. Perhaps who pretends to be angelic is actually Satan.”