With her tools being only some pots, utensils, an oven and a small refrigerator, Abeer has succeeded in manufacturing high quality products, despite the small quantities of sheep milk imported to her home-based workshop, and in building a customer network from her neighbours and acquaintances. 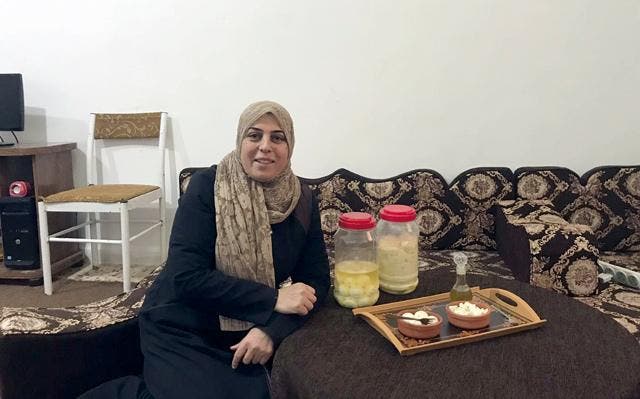 Failing to find a job, Abeer, 42, said she decided to start up her own business, hoping to secure a stable income that could sustain her sick husband and six children. She started from her home in Zarqa Governorate manufacturing dairy products from sheep milk.

Abeer utilised the practical experience she acquired from her mother and the knowledge she learned from her studying science for her diploma. “Things like density, temperature, acidity and appropriate quantities were familiar to me,” she said.

“I used to be a primary school teacher in Syria and tried to find a job in my field in Jordan, but I could not, especially as we live in a poor neighbourhood, where there is little or no demand for private tutoring,” she said.

Abeer, who came to Jordan in 2013, said: “I also tried to work with NGOs, but working hours and locations made it difficult for me, especially since I am required to take care of my children.”

Abeer was amongst a group of women owners of micro-enterprises and home-based businesses, who have recently received intensive training from CARE International on establishing, managing and developing small projects.

In the training course, she said that participating women were taught marketing and promotion techniques, problem-solving, leadership, and trust-building skills, as well as networking essentials to build a client base.

“The training has improved my knowledge with valuable information and refined my simple experience and advanced it to a better level,” Abeer said.

I learned to accept criticism on my products in a positive manner and I learned production improvement methods, resourcefulness, and how to find solutions to the problems I face — the last of which was the lack of sheep milk during this period of the year,” she said.

“Abeer is like many women who can make trademarks if provided with constant support, guidance and financing,” said trainer Mohammad Mari, who introduced the course to the women.

According to Mari, the biggest challenge facing Abeer and other women in the same situation is a lack of confidence. CARE trainings hope to boost their self-confidence through a specialised training that aims at helping beneficiaries overcome the social and economic obstacles they face in running their businesses.

In addition to the training, Abeer has participated in a saving programme designed by CARE in cooperation with the Qudurat Association for Community Development. Through the programme, which is part of CARE’s Village Savings and Loan Associations (VSLAs), each participant can save money in the fund on a weekly basis and can access a small installment loan to develop a sustainable business.

“Despite all the difficulties I faced, starting with leaving Syria through the sickness of my husband and all the resulting challenges, I managed to establish a small yet sustainable business that provides me and my family with a stable income,” Abeer added proudly.

CARE has recently launched an economic empowerment project targeting vulnerable groups of refugees and local communities, especially women and youth, with the aim of enhancing their resilience and access to income-generating opportunities.

In 2018, CARE launched a 12-year strategy to scale up its VSLAs, with the goal of supporting 50 million women and girls — and 65 million people overall — to form savings groups by 2030.

Looking ahead to 2030, CARE believes that scaling VSLAs and supporting their members to pursue their goals can have a substantial impact on the achievement of the 2030 UN Sustainable Development Goals.

With Lockdown Saudis Have Taken to TV Like Never Before