Qatar reported on Thursday 1,967 new cases of coronavirus and three deaths, raising the total number of confirmed COVID-19 cases up to 35,482 and the death toll up to 33.

The Ministry of Health also reported the recovery of 2,116 coronavirus patients, raising the total number of recoveries up to 15,399.

The three new deaths were people aged 81, 50 and 25 years, who were suffering from chronic diseases and were in intensive care. 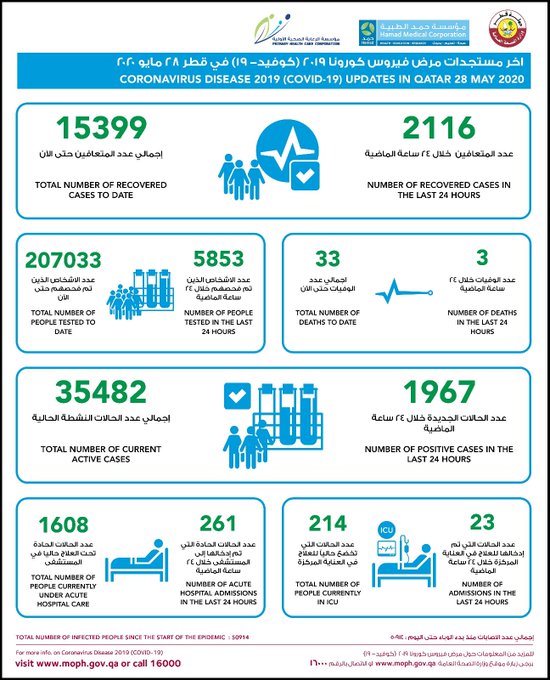 336 people are talking about this

The ministry said: “The new cases are due to expatriate workers who were infected with the virus as a result of contact with individuals who were previously infected, in addition to recording new cases of infection among groups of workers in different regions.”

It added: “The number of positive cases between citizens and residents witnessed a significant rise, with the number of infections relating to family gatherings, visits and sharing meals together with relatives and extended families.”

“Infections doubled due to family gatherings and visits between friends and extended families, and people ignoring the preventive measures recommended by the concerned authorities; the most important of which is staying at home and maintaining social distance.”

The ministry said that Qatar “is still in the peak phase of the virus outbreak.”

The state of expatriate workers in Qatar amid the coronavirus has been subject to much debate, with human rights organizations criticizing the treatment of workers in the Gulf state and saying that workers aren’t given the necessary healthcare support.

Doha denies all such reports and says that its authorities are “committed to protecting the rights of over 1.5 million expatriate workers” in the country.

Last week, a group of expat workers staged a protest in Qatar over unpaid wages. Social media users shared pictures of more than 100 men blocking a main road in one of Doha’s districts.

“In response to the late settlement of salaries, a small number of expatriate workers conducted a peaceful protest in the Msheireb area on May 22,” the labor ministry said in a statement.

“Following an immediate investigation (the ministry) has taken steps to ensure that all salaries will be promptly paid in the coming days.”

Coronavirus could infect over 650,000 in Lebanon if lockdowns not adhered to: Report

US caught off guard as protesters storm Baghdad embassy: analysts

Sudan, US delegates to meet over terrorism list with UAE officials