“We are strong people and can cope with any challenge. Like our ancestors, we will solve any problem, the entire thousand-year history of our country speaks of this,” he said.

Putin drew applause from the hall when he reaffirmed his determination to continue the “special military operation” in Ukraine that has unleashed what he said was an “unprecedented” barrage of Western economic sanctions.

He said the main aim of the invasion was to defend “our” people in the largely Russian-speaking Donbas region of eastern Ukraine – a justification that Kyiv and the West dismiss as a baseless pretext for a war that has already led to the occupation of parts of southern Ukraine far beyond the Donbas.

Putin said that Russian soldiers in the Donbas were also fighting to defend Russia’s own “rights to secure development”.“In the current situation, against a backdrop of increasing risks for us and threats, Russia’s decision to conduct a special military operation was forced – difficult, of course, but forced and necessary,” he said. 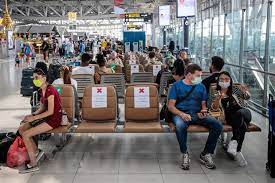 For Vietnamese stranded overseas, questions of fairness and means