Protests have broken out in cities across the United States calling for justice following the death of George Floyd in police custody when a white officer in Minneapolis pressed a knee into the unarmed Black man’s neck for several minutes.

In scenes both peaceful and violent across the country, thousands of protesters on Friday chanted “no justice, no peace” and “say his name. George Floyd.” They hoisted signs reading: “He said I can’t breathe. Justice for George.”

The demonstrations came as Derek Chauvin, the officer involved in Floyd’s death, was arrested and charged with one count each of third-degree murder and second-degree manslaughter.

Graphic video footage taken on an onlooker’s cellphone and widely circulated on the internet shows Floyd – with Chauvin’s knee pressed into his neck – gasping for air and repeatedly groaning, “Please, I can’t breathe,” while a crowd of bystanders shouted at police to let him up.

The video reignited an outpouring of rage that civil rights activists said has long simmered in Minneapolis, the largest city in the state of Minnesota, and other towns and cities across the country over persistent racial bias in the US criminal justice system and the deaths of Black people in police custody.

The charges brought by Hennepin County prosecutors came after a third night of protests in which protesters set fire to a police station, and the National Guard was deployed to help restore order in Minneapolis.

Authorities had hoped Chauvin’s arrest would allay public anger and avert continued unrest. But defying an 8pm curfew imposed by Mayor Jacob Frey, thousands took to the streets for a fourth night. A heavy contingent of National Guard, state troopers and police moved in, some on foot and some in vehicles. 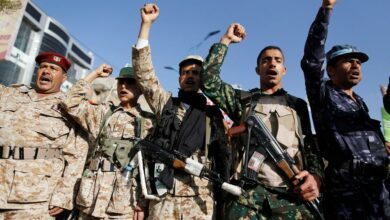