Hundreds of people are rallying in Sri Lanka’s capital, Colombo, demanding President Gotabaya Rajapaksa step down, after authorities blocked access to social media platforms and imposed a curfew to contain protests over a worsening economic crisis.

Dozens of politicians from the opposition Samagi Jana Balawegaya (SJB) alliance and its supporters gathered near Colombo’s Independence Square in defiance of the curfew on Sunday, chanting “Go home, Gota, go home”, referring to the president’s nickname, while supporters of another opposition alliance Jathika Jana Balawegaya also rallied in a town on the outskirts of the capital to protest against soaring inflation, food shortages and power cuts.

At Independence Square in downtown Colombo, the protesters’ path was blocked by police and soldiers armed with assault rifles.

Sajith Premadasa, the opposition leader, pleaded with the security forces to let the march go ahead.

“People can’t live, this is a peaceful demonstration,” he said. “Why is there a curfew? Is there a threat to national security? A tsunami? The curfew has been imposed to save the Rajapaksas from public anger.”

Rajapaksa – whose brothers hold key positions in his government, including the posts of prime minister and finance minister – deployed troops to the streets after declaring a state of emergency and imposing a 36-hour curfew that began at 6pm on Saturday.

The move was widely seen as a bid to block nationwide protests planned for Sunday.

Netblocks, a global monitoring group, confirmed the blackout, saying it took effect after midnight on Sunday.

In an apparent sign of dissent within the government, Sri Lanka’s Minister for Youth and Sports Namal Rajapaksa, who is a nephew of the president, said he would “never condone the blocking of social media” and urged “authorities to think more progressively and reconsider this decision”. 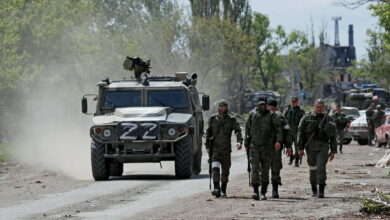 Fate of hundreds of Ukrainian fighters uncertain after surrender

Vote count under way in Ethiopia after contentious election