Protesters in eastern Sudan shut a pipeline that carries imported crude oil to the capital Khartoum, but there are enough reserves for the country’s needs for up to ten days, the ministry of energy and oil said on Saturday.

Khartoum oil refinery, which produces fuel for domestic consumption, is still working normally, the ministry added in a statement.

Another pipeline used for exporting crude oil from neighboring South Sudan is still working but it is vulnerable to freezing and damage because the protesters are blocking a vessel from loading the oil, it said.

Oil depots at Bashayer oil terminal port in eastern Sudan will be fully filled after ten days at the most if the blockage of exports continued, the ministry said. That would in turn cause South Sudanese oil fields to halt production.

Protesters from the Beja tribes in eastern Sudan are shutting ports and blocking roads in protest at what they describe as poor political and economic conditions in the region.

The ministry appealed to the protesters to end the shutdown within a week to spare the country huge financial and technical losses. 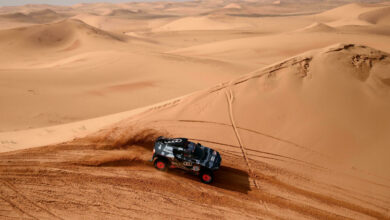 Jumblatt: French initiative is last chance to save Lebanon