Ultraconservative cleric Ebrahim Raisi won Iran’s presidential election with 61.95 percent of the votes in an election that saw the lowest turnout in the history of the Islamic Republic.

The interior ministry announced the result on Saturday, saying voter turnout was at 48.8 percent, the lowest turnout for a presidential election in the history of the Islamic Republic. Raisi garnered close to 18 million votes.

The senior judge will leave his current post as head of the judiciary in early August to replace President Hassan Rouhani.

With all serious rivals barred from running by the Guardian Council – an unelected body that answers to the supreme leader only – his victory came as no surprise.

“For Iranians, the contest was yet another indicator of the irreconcilable chasm that exists between the state and society in their country. The lackluster turnout cannot be divorced from the past three years of nationalist protest in the country,” Behnam Ben Taleblu, an Iran expert and senior fellow at the Foundation for Defense of Democracies, told Al Arabiya English.

Who is Ebrahim Raisi?

Raisi was born in 1960 in the northeastern city of Mashhad into a religious family.

He received a doctorate degree in law and jurisprudence from Mottahari University in Tehran, according to his campaign website.

Raisi has been a key figure in Iran’s judiciary since the early 1980s.

He served as the prosecutor of both cities simultaneously for several months until he was promoted to prosecutor of Hamedan province.

In 1985, Raisi moved to the capital Tehran, where he served as deputy prosecutor.

Other senior positions Raisi served in include deputy chief justice from 2004 until 2014, and attorney-general from 2014 until 2016.

Raisi’s name is tied to Iran’s mass execution of political prisoners in 1988, when he was allegedly a leading member of what came to be known as the “death committee,” a group of Iranian judiciary and intelligence officials put together by then-Supreme Leader Ruhollah Khomeini to oversee the mass execution of thousands of political prisoners at the time.

Most of the victims were leftist activists and members of the dissident group Mojahedin-e Khalq (MEK). Rights groups estimate that as many as 5,000 people were executed, while MEK puts the number at 30,000 without offering evidence to support their claim.

Iran has never fully acknowledged the executions, and Raisi himself has never publicly addressed the allegations against him.

In 2019, the United States sanctioned Raisi for human rights abuses, including the 1980s executions.

Rights group Amnesty International said on Saturday Raisi must be investigated for crimes against humanity.

“That Ebrahim Raisi has risen to the presidency instead of being investigated for the crimes against humanity of murder, enforced disappearance and torture, is a grim reminder that impunity reigns supreme in Iran,” Amnesty Secretary General Agnès Callamard said in a statement.

While he has been a key figure in Iran’s judiciary for decades, Raisi is a fairly new player in the Islamic Republic’s political arena.

Raisi owes his prominence today to a campaign – seemingly being driven by the highest centers of power in Iran – that has aimed over the past six or so years to portray him as a humble, anti-corruption, and no-nonsense figure.

In 2016, Khamenei appointed Raisi as the custodian of Astan-e Qods-e Razavi, a multi-billion dollar religious conglomerate encompassing businesses and endowments that oversees the holy Shia shrine of Imam Reza in Mashhad, the home city of both Khamenei and Raisi.

Raisi then ran for president in 2017, losing to Rouhani. But his rise within Iran’s ruling establishment went on uninterrupted. In 2019, Khamenei appointed him head of the judiciary, one of the most senior positions within the Islamic Republic.

During his tenure, the judiciary “has granted blanket impunity to government officials and security forces responsible for unlawfully killing hundreds of men, women and children and subjecting thousands of protesters to mass arrests and at least hundreds to enforced disappearance, and torture and other ill-treatment during and in the aftermath of the nationwide protests of November 2019,” Callamard said.

Iran’s foreign policy is set by the supreme leader, not the president, and is therefore unlikely to undergo major change with Raisi as president.

“Abroad, Raisi is poised to implement Khamenei’s vision. Raisi himself is no visionary, nor does the Iranian president have the power to deviate from a pre-ordained path,” Ben Taleblu said.

The United States and Iran have engaged in indirect talks in Vienna for months to revive the 2015 nuclear deal that Washington withdrew from under former President Donald Trump in 2018.

Raisi said during a televised presidential debate earlier this month that he is not opposed to the nuclear deal, and Iran’s top nuclear negotiator said Thursday the presidential election would have no impact on the ongoing negotiations in Vienna.

While Raisi is unlikely to obstruct a revival of the deal, having him as president, given his human rights record, could lessen the benefits from having sanctions lifted for Iran, Brodsky said.

“A Raisi presidency may impact the degree to which any sanctions relief under the nuclear deal will be effective in boosting the Iranian economy. This is because despite the sanctions relief, there will remain severe reputational risks for countries and companies who choose to do business with the Islamic Republic,” he said.

Domestically, Brodsky said, Raisi will likely “seek to implement the supreme leader’s vision of a resistance economy, focusing more on enhancing local production rather than on attracting foreign investment.”

“An Islamic Republic with Raisi at the helm means the mask has come off. Moreover, it means that Iran has less of a compunction about hiding its spots,” Ben Taleblu said.

Raisi is frequently mentioned as a possible successor to Khamenei and winning the election could boost his chances of becoming Iran’s next supreme leader, analysts say.

The Guardian Council’s decision to disqualify all serious rivals to Raisi from running in the election – a decision the council could not have taken without Khamenei’s approval – added to the speculation that Raisi is being groomed to become the next supreme leader.

“It is too early to definitively say whether Raisi will become supreme leader,” said Brodsky. “But it is safe to assume he is a leading contender. At the very least, if Khamenei were to pass away during his tenure as president, Raisi would be playing a critical role during the transition, including the possibility of serving on an interim leadership council.” Pentagon finds no wrongdoing in 2019 Syria strike that killed civilians 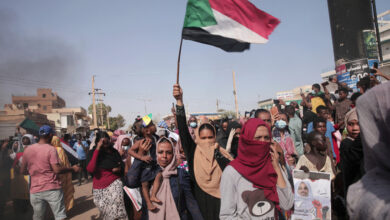