Prince William has arrived in the United Arab Emirates and started his whirlwind one-day visit by planting a tree with the help of school children.

The Duke of Cambridge, 39, who arrived in Dubai last night for his first major royal overseas visit in more than two years, toured Abu Dhabi’s wetlands at the Jubail Magrove Park today.

Prince William told school children “you are the future” in the fight to save the planet as he planted mangroves with the children Jubail Mangrove Park, Abu Dhabi, on his first engagement in the United Arab Emirates. pic.twitter.com/XCEE8b25ZP

William visited the park to learn more about the UAE’s efforts to protect the regional flora and fauna from human and environmental challenges, particularly as the country’s urban centres continue to grow and develop.

Photos from the visit were shared to the Duke and Duchess of Cambridge’s Instagram account today, with the caption: ‘First stopthe Jubail Mangroves, a nature preserve and a haven for avian and marine species native to Abu Dhabi.

‘The Abu Dhabi Mangrove Initiative will focus on sustainability and preserving the natural environment, providing vital research for supporting biodiversity – including the recovery, survival and development of more resilient varieties of the mangrove, which will in turn help protect the Abu Dhabi coastline.

‘These parks also play a role in their communities, especially for the next generation and it’s great to see programmes are in place to inspire young people to become the environmental leaders of tomorrow.’

The UAE had required masks in all public places, however in September rules were eased so that masks could be removed when doing exercise in public places, on beaches and at poolsides, in hair salons and in medical centres when being treated.

Elsewhere, Prince William, the founder of The Royal Foundation’s United for Wildlife, visited Jebel Ali Port to learn more about efforts in the region to tackle the illegal wildlife trade.

United for Wildlife, established by Prince William in 2014, has been working in the region to help facilitate efforts to counter the trade in illegal wildlife which poses an existential threat to the world’s most iconic species.

Countries all over the world, including the UAE, are making a collective effort to tackle this $150bn criminal enterprise and during his visit, Prince William learned more about public-private partnerships in the UAE helping to achieve this.

Jebel Ali Port is owned by DP World, the Principal Partner of United for Wildlife. DP World is headquartered in Dubai and handles around 10 per cent of global container traffic across its ports and terminals worldwide.

During his visit to Jebel Ali, Prince William was given a port tour to see the scale of operations at the Middle East’s largest port.

He was then shown a live demonstration of cargo being unloaded from ships, the journey through customs, learning about how cutting-edge new technology can be deployed to identify trafficked wildlife items, and support enforcement investigations.

Sultan Ahmed bin Sulayem, Group Chairman and CEO of DP World, said: ‘As a leading global logistics business, we recognise the important need to address the rising concerns posed by the illegal wildlife trade, which not only impacts biodiversity but has ramifications for our planet and local communities.

‘We are taking extensive measures to tackle the issues, including collaborating with United for Wildlife and technology companies to develop processes to improve the detection of illegal wildlife cargo.

‘We are deeply honoured by Prince William’s visit and his unwavering support to this cause and hope that organisations, governments, transport companies and influencers mobilise to raise awareness of the devastation such trade causes around the world.’

The prince announced his arrival in Dubai on Instagram on Wednesday night with a photo taken through an airplane window.

The caption read: ‘Excited to be arriving in Dubai to celebrate the UK at @DubaiExpo and discuss the vital issue of working together with the UAE and international partners to achieve a more sustainable world with @earthshotprize and United for Wildlife. W.’

It marks the Duke of Cambridge’s first major overseas trip since a December 2019 tour of the Middle East. He and Kate also visited Ireland in 2020.

The visit is being carried out at the request of the Foreign, Commonwealth and Development Office.

Prince William’s visit comes in the 50th anniversary year of the UAE and will coincide with the UK National Day being held at Expo 2020 Dubai.

The National Day will see the UK take over the full site to showcase the extraordinary talent from across the UK.

William will join these celebrations, which will also feature the Birmingham 2022 Queen’s Baton Relay, launched by Her Majesty from Buckingham Palace in October 2021, as it parades through the Expo site to visit Commonwealth National Pavilions.

The royal will also meet with young Emiratis, leaders from government and committed conservationists to strengthen relations between the UK and the UAE.

The visit also provides an opportunity to showcase The Earthshot Prize on the world stage at Expo 2020 Dubai.

Highlighting some of the remarkable innovators from the inaugural 2021 Earthshot Prize will help accelerate and scale their incredible solutions to repair the planet.

Britain has had strong ties with the UAE for almost 200 years – a relationship that endures to this day.

The region’s importance to the UK was down to its location close to the vital trade route to India via the waters of the Arabian and Red Seas.

It was the discovery of ‘black gold’ in the 1950s that transformed the Gulf from a collection of sleepy harbours, where fishing and the declining pearl industry were the mainstays of the economy, to a global financial powerhouse.

The UAE was created in 1971 by the ‘Trucial States’ which had gained their independence from the UK.

It is formed of seven states – Abu Dhabi, Dubai, Ajman, Fujairah, Ras al Khaimah, Sharjah and Umm al Qaiwain – which are governed by a supreme council of rulers made up of the seven emirs, who appoint the prime minister and the cabinet.

Kensington Palace said when the visit was first announced: ‘The bond between the UK and the UAE is deep and strong and Prince William’s visit will highlight and build upon these links as he has the opportunity to engage with young Emiratis, leaders from government and committed conservationists.’

The trip comes just days after it emerged the Duke of Cambridge is ‘supportive’ of the Queen’s move to make his stepmother Queen consort.

Prince William was not part of the decision-making process, the Daily Mail understands, but is ‘respectful’ of the logic of his grandmother’s decision. 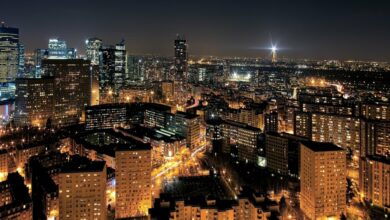 Light pollution: Huge fall in stars that can be seen with naked eye