Italian soldiers were once again lifting coffins into army trucks today as cemeteries and morgues are overwhelmed by the scale of the coronavirus crisis.

A parish priest in the town of Seriate gave a final blessing to 45 coffins today after they were laid out in neat rows in the San Giuseppe church.

The coffins were carried outside by personnel in white protective suits and face masks, who loaded them onto trucks to be taken away in what is becoming a familiar sight in northern Italy.

The bodies were destined for a crematorium in Ferrara in the province of Emilia-Romagna, because their home province of Bergamo cannot cope with the mounting death rate.

The bodies of the people whose coffins were taken away today will be cremated elsewhere, and the ashes later sent back to their relatives via the Carabinieri police.

The parish church has enough space for 80 bodies to be laid out in coffins as they wait to be cremated.

‘We do not put them in a shed, but in a church, that is, in the house of the Lord,’ said parish priest Don Mario, according to Italian media.

The province of Bergamo has had more than 6,700 cases of coronavirus – more than many countries – and dozens of people have died.

The wider region of Lombardy is the hardest-hit region of Italy, accounting for more than 30,000 cases and 4,000 deaths by itself.

There are also fears that the death toll could be even higher, because some people could be dying of coronavirus without ever being tested.

The Bergamo mayor’s office said earlier this month that 400 people in Bergamo and neighbouring towns had died in one week alone – four times higher than the previous year.

Only 91 of them had tested positive for the virus, still leaving a major excess of deaths which suggests that others may have died without being formally recorded as virus patients.

Giacomo Angeloni, the local official in charge of cemeteries in Bergamo, said last week that the local crematorium was handling around 24 bodies a day, almost twice its normal maximum.

Local authorities in Bergamo had appealed for help with cremations after being overwhelmed by the death toll.

The pews of the crematorium church have been removed to leave space to lay out scores of coffins but more have been arriving every day.

One Italian who saw a column of trucks leaving Bergamo last week said it was ‘one of the saddest photos in the history of our country’, while another said it was a ‘photo of war’.

‘We are Italians and it is at times like these that we bring out the best in us. We will get out of it and we will do it for them too,’ one said.

Hospitals in Bergamo have also found themselves overwhelmed. Some 134 family doctors out of 600 had fallen sick or were quarantined, Guido Marinoni, the head of the local association of doctors, said this week.

In the city’s nursing homes, the situation was even worse, with 1,464 health workers infected out of 5,805, he said. Three doctors have died.

‘I’m worried about the possibility they could succumb physically and psychologically because if they were to succumb, it would really be a disaster,’ cemetery director Angeloni told Italian radio.

Figures released by an Italian research institute yesterday showed that some 5,760 health workers had been infected with coronavirus.

Nino Cartabellotta, the head of the Gimbe foundation which collected the data, urged that this ‘phenomemon’ must be ‘curbed to safeguard those who take care of us’.

The day-to-day increase of 5,249 marked the second consecutive rise of around eight per cent, lower than at any point since the virus began to spread in Italy.

However, officials have cautioned that it is still too soon to say if Italy is about to see a peak in the outbreak.

Italy’s 743 new deaths yesterday, taking the total from 6,077 to 6,820 broke two days of successive declines that had taken the number down to 601 on Monday.

It set an unwanted world record of 793 fatalities in a day on Saturday. 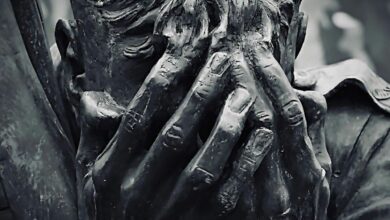 Your pictures on the theme of ‘sculpture’ How Are Syrians Spending Ramadan in Ruined Idlib?