They confirmed in April that they are expecting their first child together.

And pregnant Gigi Hadid looked sensational as she posed for a rare selfie with boyfriend Zayn Malik as part of a special campaign for British Vogue.

The parents-to-be were joined by Helena Christensen who also shared a selfie for a project with Hardlyeverwornit.com, in which celebrities auction off treasured items of clothing for charity. 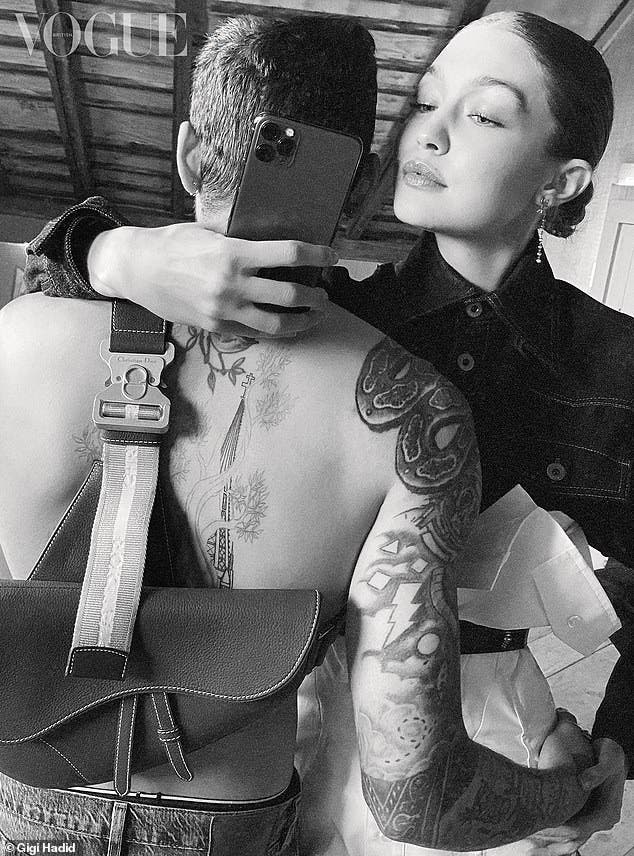 Gigi, 25, pouted into the camera as she posed for an arty black and white shot with her former One Direction star beau, 27.

A topless Zayn cuddled Gigi close as he posed facing away from the camera, while Gigi snapped the image in a mirror over his shoulder.

An the model looked glowing as she rocked a denim top and edgy skirt from Fendi, while she draped a Dior saddlebag over his shoulder.

The expectant mum swept her blonde tresses into a sleek bun while she added a touch of bling with dazzling drop earrings.

Meanwhile, Helena, 51, showcased why she was one of the most in demand supermodels in her day as she posed up a storm for her own snap.

The Danish beauty flashed the dress in a plunging Christian Dior dress, which showed off plenty of cleavage and leg.

Posing in front of foliage, she sure put on an eye-catching display, with her photo encased in a gilt gold frame.

Gigi and Helena are one of a number of models who’ve joined forces with British Vogue to raise money and support for two charities: NHS Charities Together and the National Association for the Advancement of Colored People (NAACP).

The project will see 23 of the world’s most beautiful women select pieces of clothing from their own wardrobe to be auctioned off, with the campaign working in partnership with Hardlyeverwornit.com (HEWI).

All funds raised in the The Way We Wore auction will be split equally between the two worthy charities.

Other famous beauties also taking part include Joan Smalls, Lily Aldridge, Paloma Elsesser and Christy Turlington Burns, who like Gigi and Helena, took their own lockdown snaps from their homes to showcase their items.

Fans are also able to purchase limited-edition prints of their selfies, which also feature in July’s issue of Vogue, with the proceeds going to charity.

Gigi, who’s snap was taken on April 2nd in Pennsylvania, said of the project: ‘I appreciate the opportunity to give back in this way, and hope that whoever ends up with these pieces – the Fenty top and skirt and Dior saddlebag – really enjoys them, knowing that their contribution will help those struggling due to Covid-19.

‘Zayn and I send our love and best wishes to everyone.’

It’s been reported pregnant Gigi, has ‘always wanted several kids’ and that she and Zayn ‘plan to have a large family’.

A source told People the happy couple ‘plan to have a large family’, and added: ‘They’ve been through their ups and downs, but neither stopped caring about the other.’

Of expanding their brood, they went on: ‘They’ve jumped on the timing of having a baby and are preparing for their new lives.

‘Gigi is young but always said she wants several kids. She’s sensitive and nurturing and will be a great mom.’

The publication also reported as both Gigi and Zayn come from big families they are hoping to have a large brood of their own.

It was also claimed that the pair are enjoying spending quality time together while in quarantine amid the coronavirus pandemic, as it allows them to ‘really experience’ the pregnancy day by day.

The news comes after Gigi confirmed her pregnancy while on Jimmy Fallon, as she thanked the talk show host for congratulating her on her pregnancy.

‘Obviously we wish we could have announced it on our own terms, but we’re very excited and happy and grateful for everyone’s well wishes and support,’ she said.

British Vogue’s The Way We Wore auction, in partnership with HEWI, launches at 2PM BST on Tuesday 9th June at Vogue.hardlyeverwornit.com and will be live for 72 hours.

Tom Hanks and His Wife Rita Wilson Have Coronavirus!