Pope Francis warned of “the consequences of Lebanon’s economic collapse” as he called on Lebanese political and religious leaders to put aside their own interests and commit to achieving justice, Vatican News reported.

The Pope added that political and religious leaders in Lebanon should implement reforms, and act in a transparent manner and bear the results of their actions.

Lebanon has been facing an unprecedented economic and political crisis with the political parties in control failing to agree on a roadmap to resolve the crisis. French President Emanuel Macron proposed a resolution plan for the small nation, but it has not been adopted yet by politicians in office.

“I wish that Lebanon will witness a political commitment, nationally and internationally, that contributes to strengthening stability in a country facing the risk of losing its national identity and plunging into regional tensions and tensions,” the Pope added.

Pope Francis stressed that “weakening the Christian component in Lebanon threatens to destroy the internal balance.”

“I stress on the necessity for the Cedars nation to preserve its unique identity in order to ensure a pluralistic, tolerant and diverse Middle East, in which the Christian presence makes its contribution and is not limited to being a minority only,” the Pope added.

The Pope also highlighted “the importance of addressing the problems associated with the presence of the displaced Syrians and Palestinians.” 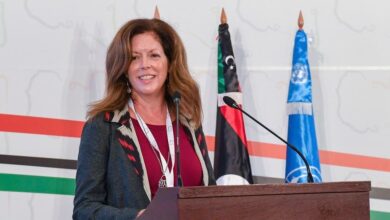 US, Russia at odds on extending UN Libya mission