US Secretary of State Mike Pompeo visited Japan on Tuesday to rally support from Washington’s closest allies in Asia, calling for deeper collaboration with Japan, India and Australia as a bulwark against China’s growing regional influence.

The East Asia visit, Pompeo’s first in more than a year, coincides with worsening tensions with China. Yet the call for a united front against Beijing is a sensitive subject for Washington’s allies, which are reliant on China for trade.
In comments before the start of a meeting of the Quad grouping of the four nations’ foreign ministers, Pompeo spoke in typically unsparing terms against Beijing’s ruling Chinese Communist Party. That was in contrast to his three counterparts, all of whom avoided calling out China directly.

“As partners in this Quad, it is more critical now than ever that we collaborate to protect our people and partners from the CCP’s exploitation, corruption and coercion,” Pompeo said, referring to the ruling party.

“We see it in the South and East China Seas, the Mekong, the Himalayas, the Taiwan Strait.” 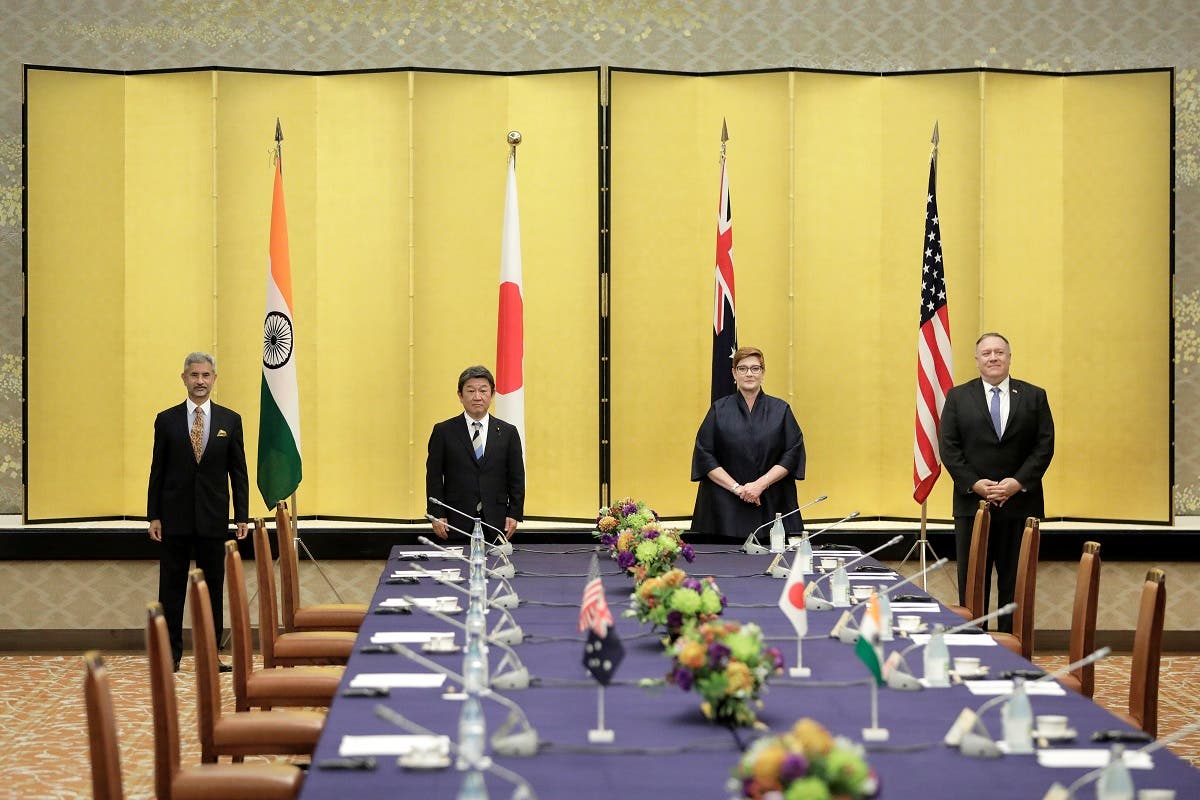 Pompeo earlier met one on one with his three counterparts, meetings in which according to the State Department reaffirmed the importance of cooperating among them to advance peace, prosperity and security in the Indo-Pacific.

China has denounced the Quad as an attempt to contain its development.

The four nations in the grouping stated their support for a free and open Indo-Pacific. In an interview with Japan’s Nikkei newspaper, Pompeo spoke of formalizing and potentially broadening the Quad grouping.

“Once we’ve institutionalized what we’re doing – the four of us together — we can begin to build out a true security framework,” Pompeo told the Nikkei, suggesting other countries could be added to that “fabric” at “the appropriate time.”

Pompeo told the Japanese public broadcaster NHK it was important that the “shared picture” of the challenge was shared with Southeast Asian countries.

Analysts say such a formalized grouping referred to by Pompeo may never take shape, given the need for countries in the region to balance their relationships with China. But they say such remarks serve as a warning to China and play to its fears that the Quad might one day take shape as NATO did in Europe to contain the Soviet Union.

Pompeo’s visit was supposed to include trips to Mongolia and South Korea but was cut back to one day after President Donald Trump was diagnosed with COVID-19.

The top U.S. diplomat also reiterated the Trump administration’s criticism of China’s handling of COVID-19 after it first broke out in the Chinese city of Wuhan.

“When we met, now, last year, the landscape was very different. We couldn’t have imagined a pandemic that came from Wuhan. That crisis was made infinitely worse by the Chinese Communist Party’s cover-up,” he said.

The United States and China, the world’s top two economies, are at loggerheads over a wide range of issues from Beijing’shandling of the coronavirus to its imposition of a new security law in Hong Kong and ambitions in the South China Sea.

Most Asian allies have been pleased with Washington’s toughness toward their regional rival China but have not so eagerly welcomed the highly charged recent rhetoric from Trump and Pompeo and remain wary of going too far in antagonizing China.

Part of the problem for Washington’s Asian allies is their dependence on China for trade. China was the top destination for Australian exports in 2019, the No. 2 destination for Japanese exports and the No. 3 destination for Indian exports, according to International Monetary Fund direction of trade statistics compiled by Refinitiv.

Japanese Foreign Minister Toshimitsu Motegi said after the talks the nations had confirmed they would advance with practical talks on infrastructure, cybersecurity and other areas.

Australian Foreign Minister Marise Payne said the strategic environment in the Indo-Pacific was becoming more complex, and pressure on the rules underpinning regional stability could undermine recovery from the COVID-19 pandemic.

“We emphasized that, especially during a pandemic, it was vital that states work to ease tensions and avoid exacerbating long-standing disputes, work to counter disinformation and refrain from malicious cyberspace activity,” Payne said.

“Ministers reiterated that states cannot assert maritime claims that are inconsistent with international law, particularly the United Nations Convention on the Law of the Sea (UNCLOS),” she added, in comments that appeared to refer to China’s actions in the South China Sea.

The meeting had agreed to strengthen cooperation with regional partners, including in the Mekong, and convene Quad ministerial meetings on a regular basis, she said.

As expected, there was no joint statement from the members. UN says millions at risk of hunger in South Sudan