Last week, a complaint was filed in India against some students at a premier academic institution for “spreading hate” after they sang a famous Urdu poem by legendary Pakistani poet, Faiz Ahmad Faiz, during a demonstration against the Citizenship Amendment Act.

In his complaint, Vashi Mant Sharma, professor at the Indian Institute of Technology’s Kanpur campus (IIT-Kanpur) in Uttar Pradesh state, said he objected to the following lines that were sung:

[When idols of falsehood would be cast aside from the abode of God (Kaaba)
When we – the pure, the outcasts of sacred place would be placed on thrones
When crowns would be tossed around, when thrones would be demolished
We will be the witness]

“It calls for the removal of all idols and says that only Allah’s name will remain at the end,” Sharma told Al Jazeera. “I don’t know what is the context of the poem but what matters is what is being said.”

Responding to a tweet with a video of the event, IIT Kanpur’s director Abhay Karandikar said the institute would “not tolerate any indiscipline”, and formed a committee to look into the matter.

While the committee is yet to submit its report, thousands of students across India continue to sing the same poem, titled Hum Dekhenge, as they march against the contentious law, which critics see as anti-Muslim.

In the poem, explains writer and historian Rana Safvi, Faiz used religious symbolism and words to protest against an unpopular government. 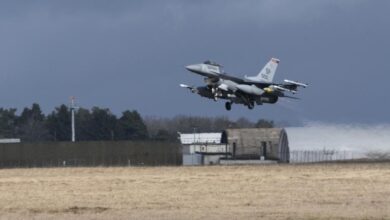 Guatemala cracks down on caravan of 9,000 migrants bound for US