An adorable cat with a facial condition which makes him appear permanently-startled has taken the internet by storm.

Natalia Zhdanova, 40, from Rostov, Russia, found weak and sickly stray cat Fedya abandoned in her back garden when he was just a few days old, nearly two years ago.

His back legs were wonky and his eyes misaligned, and Natalia decided to take in the orphaned animal, gradually nursing him back to health with the help of her neighbour’s cat, Handsome.

The feline would come and visit the poorly kitten daily, becoming a ‘father figure’ to him and often appearing alongside Fedya on his Instagram page, which has gathered over 4,000 followers in the short time since its launch.

The reason for Fedya’s unusual appearance is still unclear, but Natalia suspects that it’s the result of a genetic condition or being dropped by his mother as a kitten while climbing over fences.

‘He was very weak and was dying. Handsome cleaned and licked Fedya and became like a father figure to him’, said Natalia.

Natalia, who writes educational books for children, added: ‘We’re not sure if it’s a genetic deformity or if he was dropped by his mum as a kitten.

‘Now he is much healthier. He is a very sweet, gentle, playful and intelligent cat. He purrs very loudly.’

Fedya is now a healthy adult at one year and nine months and his owner says the cat is still best of friends with the neighbour’s cat.

‘He is inseparable with Handsome,’ said Natalia. ‘They are the best of friends.’

Natalia says she’s been pleasantly surprised by the reaction her cat has had online, and says she values her pet’s ‘kindness and spontaneity’ the most.

‘We were very surprised by the popularity of Fedya!

‘For us, he is an ordinary, simple cat, with a unique appearance, no more’, said Natalia in an interview with Bored Panda.

‘It is very nice, of course, that so many people love Fedya, this is so encouraging for us!’ 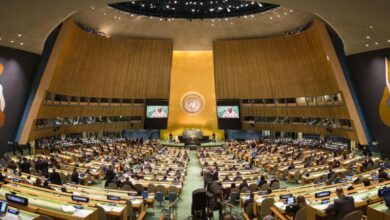 ‘No Colors Here’! Artists Focus on ‘Hellish Representation’ of Lebanon