Palestinian rap crew BLTNM, who are based in Ramallah, starred in a new campaign for British luxury fashion house Burberry.

The group-of-three, who have been making waves in the music scene across the region since coming together in 2016, shared clips of the advert on the group’s Instagram page and YouTube channel this week.

In the short videos, the artists, who go by the names Shabjdeed, Al-Nather and Shabmouri, were seen wearing the label’s distinctive TB monogram on basic white and black t-shirts, polos and a scarf.

Italian designer and chief creative officer Riccardo Tisci has managed to revamp the 164-year-old label when he joined the fashion house in 2018. Tisci reimagined the iconic heritage house’s typeface, introducing the TB monogram and brought an edginess to its classic British style.

The campaign, shot in the desert, was curated by Ma3azaf, an Arabic web-magazine dedicated to contemporary Arabic music.

This is not the brand’s first collaboration with Palestinian talents. In February, Burberry released its spring 2020 campaign starring part-Palestinian sister duo Gigi and Bella Hadid.

On the beauty front, the brand recently selected Dubai-based model Lana Albeik, who originally hails from Palestine and Syria, to take part in the latest Burberry Beauty campaign alongside British models Georgia Palmer and Joanna Halpin, and musician Suki Sou.

His velvet-like sand creation of the TB monogram was sandwiched between the city’s dunes. 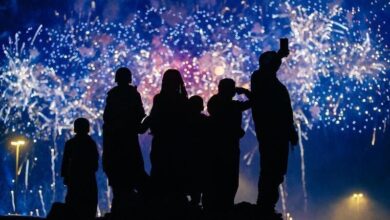