Palestinian artist Samia Halaby, who recently turned 85, has been painting for more than 60 years, and she is still learning and discovering.

“Absolutely, you keep learning,” she tells Arab News from her New York studio. “If you stop learning, you’re repeating yourself; it becomes a performance, and at what point does that become boring?”

Halaby’s latest exhibition, “Flurrying,” which ran until January 5 at Dubai’s Ayyam Gallery, presents a series of personal memories and scattered shapes intertwining on abstract canvases, some of which were painted during lockdown. She experiments with hand movements, creating geometrical and gestural compositions that burst with color and movement.

A piece from 2021 shares the show’s name. The canvas is full of vibrant lines, almost attacking each other, representing a sight observed by Halaby on a winter’s day. “It was snowing between two buildings and the wind was casting the snow in all kinds of directions,” she recalls. “I took a video of it, and I thought, ‘Aha! This is the answer to all the questions I’m asking.’”

For Halaby, her art is about trying to capture little moments that attract her eye and stay in her mind. “All of us have seen dandelions flying, snow flurrying or rain falling,” she explains. “Our brain registers them, our eye registers them. We may not have the verbal language to express them, but I’ve given you a visual language to express them.”

In “Evening in the Desert,” painted in 2019, a kaleidoscope of squares and cubes roam in tones of purple, blue, and yellow. “That’s a very special moment,” she says. “A good friend invited my sister and I to dinner in Jordan. We drove to the Ghor (in the Jordan valley) and we had a great day. On the way back, the sun was setting, and I couldn’t believe what I was looking at — the beauty of the color; the subtlety, the fine differences.”

Another piece on display was inspired by a conversation between Halaby and a fellow Palestinian painter, who creates calligraphy-based works. “She said, ‘I’m thinking of my parents and I’m writing them letters, telling them about what we’re going through in Palestine,’” says Halaby. “She was crying as she was writing those letters. It was so touching. So, I was kind of being influenced by her.”

“Written in White Air for Palestine” is rendered in a flurry of brush marks, in which one can almost spot an Arabic letter or two, as part of what she calls ‘calligraphic movement.’ It hits close to home in several ways.

Born in Jerusalem, Halaby left her native country 70 years ago. She began painting during her childhood. “I remember my paternal aunt once found me making brushes out of chicken feathers,” she says. “My sister and her friend used to ask me to draw for them. The idea of becoming a painter professionally was thanks to my mother, who encouraged me.”

Since Halaby was 14, the US has been her home, but the memory of her true homeland still influences her art. “My commitment to Palestine is permanent. It’s part of me,” she says. “I lived through my father and mother and their generation being torn apart.”

Halaby is now a member of a respected tier of Arab modernists from the second half of the 20th century; she is friends with Jordanian sculptor Mona Saudi and exchanged letters with the late poet and painter Etel Adnan. An admirer of nature and Islamic geometry, abstraction is and has been her craft, which she describes as “the language of the future for painting.”

Even with all her years of experience, though, she says it can still be difficult to know when a painting is finished. “It’s one of the hardest things. I don’t think I have a (comprehensive) answer,” she says. “It’s easy to ruin a painting, but it’s also important to recognize that you’ve ruined it too.”

There is something warm and assuring about Halaby — she encourages viewers to stick to their own interpretation and understanding of an artwork, even if it’s not the one its producer intended.

“I think viewers should trust their own sensations. When you look at a painting and you see hints, you should trust that,” she says. “The fact that you come to the painting and see something in it — no matter what you see — only makes me feel better.” 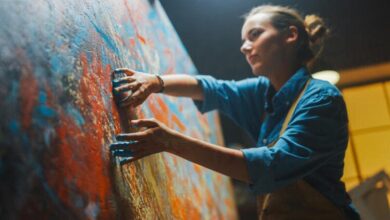 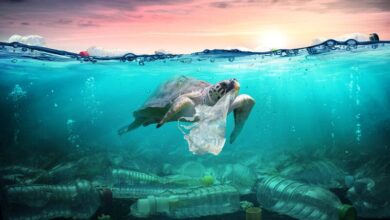