A Saudi artist is making a name for himself in Hollywood after his paintings were selected to adorn the walls of some of the famous Los Angeles neighborhood’s most luxurious properties.

Abdulrahman Hamdi’s artwork has been decorating homes up for sale in the film capital of the world, and some of the residential properties his pieces hang in are on the market for more than $14 million.

Hamdi, backed by his mother, his biggest supporter, secured an “amazing opportunity” to work for Premier Stagers, a leading US luxury staging and interior design company, a breakthrough that has helped to provide a shopwindow for his paintings.

And his American success story does end there: A Los Angeles-based real estate magazine has published one of his works on its front cover, and Vogue Arabia ran an article about Hamdi accompanied by a picture of another of his paintings.

His artistic talents were first spotted by his kindergarten teachers but at elementary school he said students paid more attention to football and his tutors often frowned on his drawings.
Now living in Los Angeles, Hamdi, who gained a master’s degree in law, told Arab News that he had been obsessed with fine art from an early age.
“At the time, my kindergarten peers were waiting for the physical education class, while I was counting hours for the arts class to begin. I used to save up money (to buy painting tools) from the amounts I received from my relatives on Eid occasions.”

Abstractionism slowly began to capture his interest and he started displaying his artwork on social media platforms, such as Instagram, with the hope of one day becoming a professional artist.
“I consider abstract art, with its broad scope, as an interesting art. Every day, one sees something new in an abstract painting and feels more of it,” he said.

However, in late 2014, Hamdi was involved in a traffic accident that completely changed his outlook on life.
“I was locked up in memories and pains. I even failed to express my feelings in words. I became completely destroyed. I then realized that drawing was the only way to take me out of my sufferings.

“When the unpleasant event was over, colors began to mean something else to me, and I began to deal with them differently,” he added.
At first, he felt apprehensive about displaying his abstract paintings in public, fears that were soon to be justified as exhibition halls rejected his approaches. But he said the reforms now taking place in Saudi society had changed attitudes and art had been given a raised profile through the support of Crown Prince Mohammed bin Salman and bodies such as the Misk Foundation.

Hamdi’s first participation in an exhibition came at the Misk Historic Jeddah event in 2017, and the following year he took part in Misk Art, which encouraged artists to promote their cultural identity in their works. 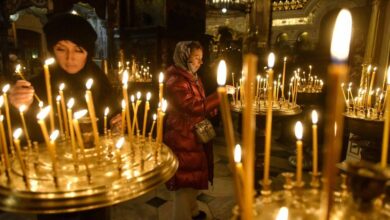 In pictures: Orthodox Christians around the world mark Christmas

After 14 Years Woman Finds Out Its The Wrong Wedding Dress